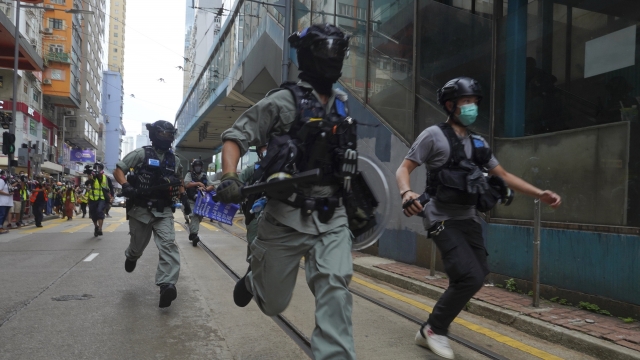 The legislation went into effect just hours after it was passed Tuesday by China's top legislative body. It criminalizes attempts at succession, terrorism, subversion against China's central government, and colluding with foreign forces. Those offenses all carry maximum penalties of life in prison.

Suspects in certain cases can be extradited to the mainland to face trial. A local police unit will be dedicated to investigating cases. And Beijing will set up an office in Hong Kong to handle crimes against national security and collect and analyze intelligence.

"The purpose of this piece of legislation is not to just punish, it is also to deter. ... But I still believe that the great, great majority of Hong Kong people are law-abiding citizens. They love the country, they love Hong Kong. They want to have stability and prosperity especially at a time when we are affected by COVID-19."

But hundreds of pro-democracy demonstrators still took to the streets in Hong Kong Wednesday to protest the legislation. Police responded by deploying water cannons and firing pepper spray into the crowds. Officers later said they arrested dozens of protesters — two of whom on suspicion of violating the new national security law.

In response to the law's enactment, officials in Taiwan opened a special office to help Hong Kong residents who now want to leave the city.