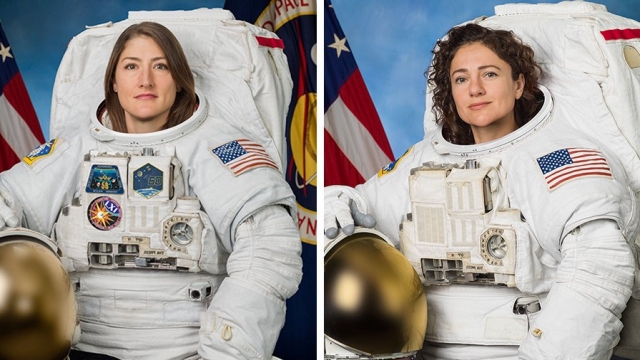 Two women, one incredible view and a chance to make history.

NASA astronauts Christina Koch and Jessica Meir are scheduled to make the first all-female spacewalk later this week. It will be Meir's first spacewalk and Koch's fourth.

NASA Administrator Jim Bridenstine tweeted the spacewalk will take place on Thursday or Friday. The astronauts will "replace a faulty battery charge-discharge unit" on the International Space Station.

NASA had scheduled an all-female spacewalk in March, but there was a change of plans. There weren't enough prepared spacesuits that would fit Koch and Anne McClain, so Nick Hague ended up taking McClain's place. The decision received some hate on social media.

To put into perspective just how big a deal this is: There have been more than 200 spacewalks for the International Space Station, but only 14 women have ever been on a spacewalk, and they've always been accompanied by men.

If everything goes according to plan, Meir will be the 15th woman to perform a spacewalk.