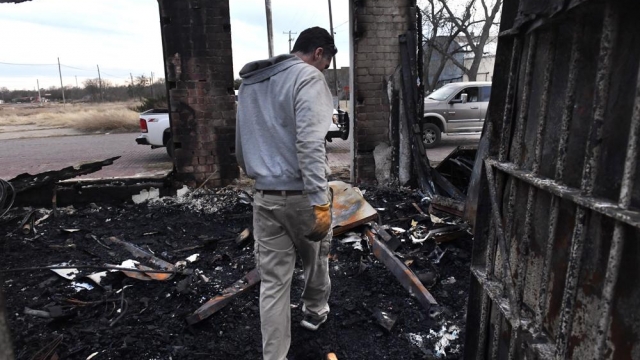 Fire crews in Texas made progress Saturday against a massive complex of wildfires that have killed a deputy sheriff and burned at least 50 homes, officials said.

"Progress has been made, but fire activity has picked up with rising temperatures and lower humidity," said Matt Ford, spokesperson for Texas A&M Forest Services.

About 30% of the flames have been contained.

The fires had burned about 130 square miles, including about 70 square miles in the Eastland Complex, according to the agency. That area is around 120 miles west of Dallas.

"We are predicting weather severity to increase" Sunday, said Ford. "Fire activity may increase based on weather conditions (but) containment lines are holding" thus far.

The National Weather Service forecast for the area called for high temperatures in the low 80s on Sunday with winds of 15-20 mph  and gusts up to 30 mph.

The forecast also calls for a 90% chance of rain on Monday, which Ford said would be welcome, but the winds could shift and drive the fire in another direction.

"Any kind of water source or rain is going to be beneficial," in extinguishing the flames, Ford said. "We'll hope for the best and prepare for the worst."

Gov. Greg Abbott said late Friday that at least 50 homes had been destroyed by flames with more possibly to be found. He declared a disaster in the 11 counties hardest hit by wildfires. The Texas A&M Forest Services warned that fires could also affect parts of Oklahoma and Kansas, and Nebraska and warned of an extreme fire risk in those states.

The Eastland County Sheriff's Office released more details on the death of Deputy Sgt. Barbara Fenley. In a statement, the office said she was going door to door, getting residents to evacuate their homes Thursday and it was "last heard that she was going to check on an elderly individual."

"With the extreme deteriorating conditions and low visibility from smoke, Sgt. Fenley ran off the roadway and was engulfed in the fire," the sheriff's statement said.

About 18,000 people live in Eastland County and about 475 homes were evacuated in the area, Ford said.

"We do have assessment teams on the ground investigating exactly how many homes were lost," Ford said.

Several months of dry, windy weather have fueled deadly wildfires in Kansas and Oklahoma, including one a few weeks ago. In remote, western Nebraska ranching country, a large wildfire has been burning for several days. Meteorologists said they were hopeful that the expected rain showers early next week across the Plains would reduce the risk.

The fires caused hazy conditions hundreds of miles away and prompted automated phone messages from the Houston Fire Department and the city's Office of Emergency Management on Friday alerting area residents to smoke and ash.