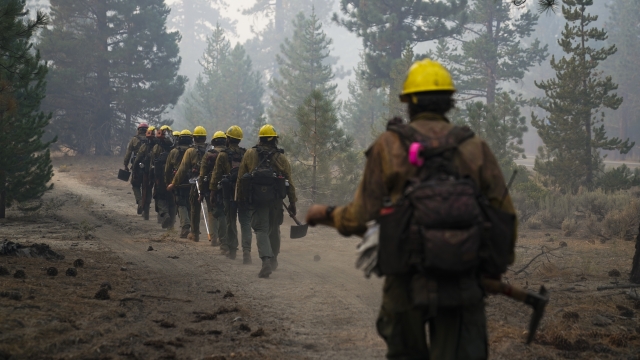 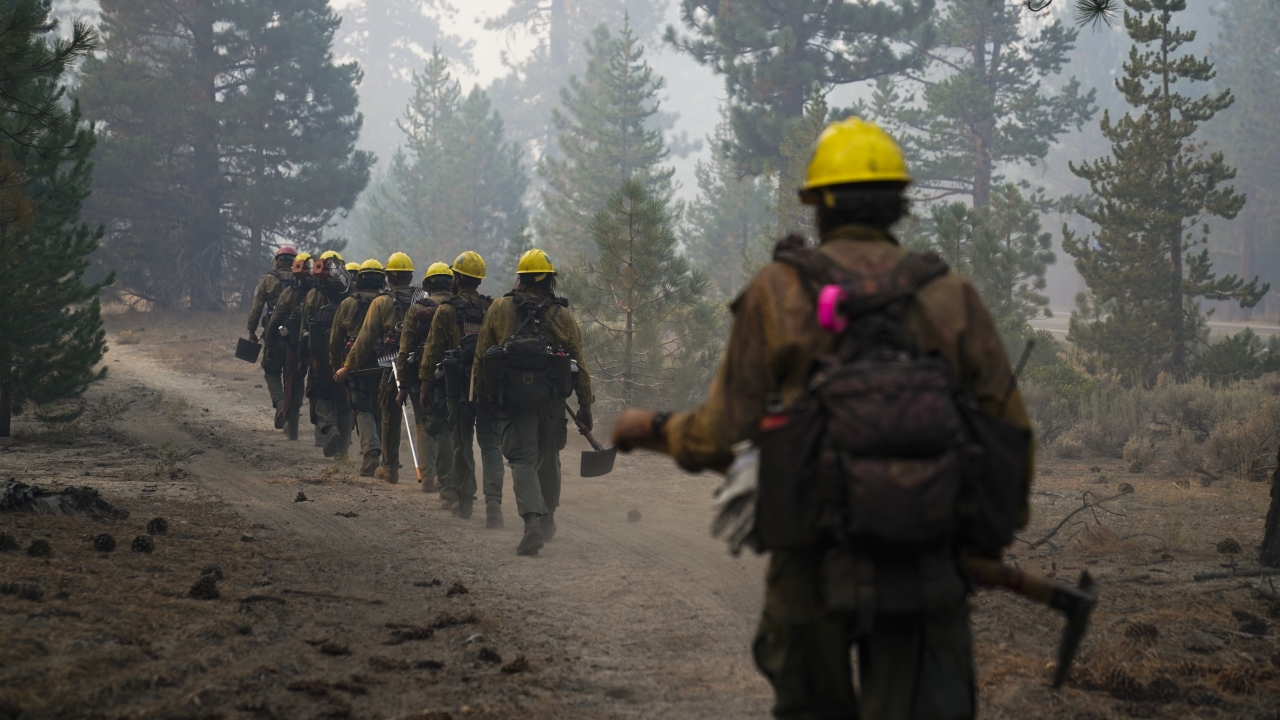 The huge California wildfire near Lake Tahoe resort communities has calmed down significantly and was growing at the smallest rate in two weeks, but firefighters must stay engaged and take advantage of good weather while it lasts, commanders said Friday.

The Caldor Fire remained only a few miles from the city of South Lake Tahoe, which was emptied of 22,000 residents days ago, along with casinos and shops across the state line in Nevada, but no significant fire activity occurred there on Thursday, officials said.

"I'll sum everything up on the incident with the words cautiously optimistic, and that's as the result of a lot of hard work that you've put in now in over two weeks of being here," Tim Ernst, an operations section chief, told firefighters.

The nearly 333-square-mile fire was not making any significant advances and was not challenging containment lines in long sections of its perimeter, but Ernst said "the risk is still out there" with some areas that remained hot.

The fire had been driven northeast on a course leading to South Lake Tahoe for days by southwestern winds, but that pattern ended this week and containment of the blaze increased to 29 percent.

"Very positive trends with regards to weather," said Dean Gould, a U.S. Forest Service administrator. "That's huge for us. Let's take full advantage of it while we have this window."

Gould said the Caldor Fire's growth rate had declined for four straight days and that its growth from Thursday to Friday morning was just 2,350 acres (3.6 square miles).

"The last time it grew that small of an amount was 14 days ago," Gould said. "Things are clearly heading in the right direction for us."

Amid the positive outlook, incident meteorologist Jim Dudley warned that the air mass in the Sierra Nevada drains downslope every night and then sloshes upslope during the day and that the region's terrain of ridges and deep canyons can create winds that go in "squirrely directions."

"Just because we don't have red flag wind conditions across the fire, the wind threat is still there and it's all localized," he warned.

The fire — which began Aug. 14, was named after the road where it started and raged through densely forested, craggy areas — was still considered a threat to more than 30,000 homes, businesses and other buildings ranging from cabins to ski resorts.

But there was optimism and progress as winds eased on the fire's western flank. On the fire's northeastern side, firefighters with bulldozers and shovels steadily hacked out fire lines and burned away vegetation to box in the flames before they reached Lake Tahoe — despite gusty ridgetop winds.

"In the valleys we're doing plenty of work," fire information officer Marco Rodriguez said. "The crews are working and they're doing controlled fires ... to try to make those containment lines a little bit stronger."

Residents who were forced to flee South Lake Tahoe earlier this week remained evacuated along with people across the state line in Douglas County, Nevada.

The resort can easily accommodate 100,000 people on a busy weekend but on Thursday, just before the Labor Day weekend, it was eerily empty.

Yet after days of flames threatening to engulf the resort at any moment, any respite was welcome.

"I feel like we are truly the luckiest community in the entire world right now. I'm so incredibly happy," said Mayor Tamara Wallace, who evacuated to Truckee, California.

"It's finally a chance to take a breath," said Clive Savacool, chief of South Lake Tahoe Fire Rescue. "It's a breath full of smoke. Nonetheless, I think we're all breathing a little bit easier and we feel like we're making some progress."

Russ Crupi, who two days ago was arranging sprinklers around his mobile home park in South Lake Tahoe just miles from the fire line, had turned off the water for now, feeling confident his neighborhood was no longer under threat. The nearby mountains, cloaked in smoke for most of the week, had become visible.

"I'm just happy they stopped it. It looked close," he said.

Farther west, evacuation orders were lifted or downgraded to warnings in several areas of El Dorado County. Gould said the total number of evacuees went down by 5,500 in one day.

Friday's forecast called for lighter winds but also extremely dry daytime weather, with a warming trend through the weekend as high pressure builds over the West, fire officials said.

More than 15,000 firefighters were battling dozens of California blazes that have destroyed at least 1,500 homes. One blaze, the Dixie Fire, was about 65 miles north of the Caldor Fire. It is the second-largest wildfire in state history at about 1,350 square miles and is 55 percent contained.

California has experienced increasingly larger and deadlier wildfires in recent years as climate change has made the West much warmer and drier over the past 30 years. Scientists have said weather will continue to be more extreme and wildfires more frequent, destructive and unpredictable. No deaths have been reported so far this fire season.