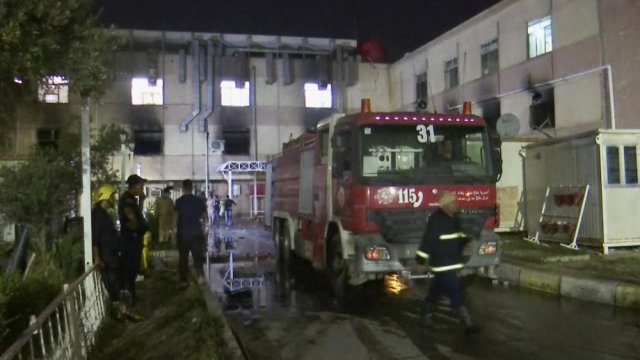 SMS
Fire in Baghdad COVID-19 Hospital Unit Kills 82, Injures 110
By Alex Arger
By Alex Arger
April 25, 2021
The fire may have been caused by exploded oxygen cylinders, but officials are blaming the hospital administrators, too.
SHOW TRANSCRIPT

A fire tore through a Baghdad hospital's intensive care unit Saturday night, killing 82 people and injuring 110 others. The next day... relatives searched for unaccounted loved ones.

Firefighters and ambulances rushed to the scene, putting out the flames across the Iraqi hospital's second floor, rescuing at least 200 people and carrying out burned bodies... from the wing dedicated to treating sick COVID patients. At least 28 of the dead were on ventilators, battling severe symptoms.

Exploded oxygen cylinders are suspected in causing the blaze, but administrators are also being accused of negligence. Iraq's prime minister fired key hospital officials, including the director-general of the Baghdad Health Department and the hospital's director, hours after the incident.

In an emergency meeting after the first fire broke out, he said, "Negligence in such matters is not a mistake, but a crime for which all negligent parties must bear responsibility," and gave Iraqi authorities 24 hours to present the investigation findings.

The blow to the Iraqi hospital comes in the midst of a severe COVID wave there. Daily coronavirus rates are averaging above 8,000 new cases, the highest since the pandemic broke out there last year.