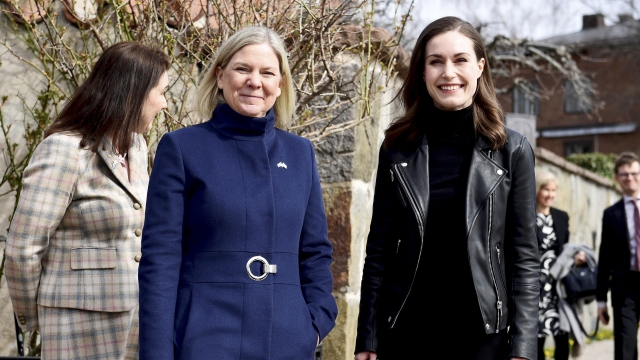 SMS
Finland, Sweden Move Toward NATO Membership Amid Russian Aggression
By Ben Schamisso
By Ben Schamisso
April 19, 2022
Finland and Sweden have remained non-aligned for decades, but they're now expected to apply for NATO membership in the coming weeks.

A renewed sense of patriotism is flourishing in Sweden and Finland in the face of renewed Russian aggression next door.

Neutrality has been a foreign policy cornerstone for both countries for decades, but the war in Ukraine is changing everything.

“I think it will happen quite fast, within weeks, not within months," Finland Prime Minister Sanna Marin said.

Helsinki and Stockholm are now widely expected to ditch their neutral identities and apply for NATO membership in the coming weeks.

The move would mark NATO's most significant expansion plan in nearly 20 years.

"We had banked on Russia becoming peaceful, and now when it has attacked in such a brutal and massive and unprovoked attack on a peaceful neighbor, which is also nonaligned, it made people think," said Robert Dalsjö, former senior adviser to Sweden's Ministry of Defense.

Finland’s border with Russia is over 800 miles long.

"Finland and Sweden want to join NATO for the same reason that Ukraine wants to join NATO," said Ian Kelly, former public affairs adviser with the U.S. Mission to NATO. "They see it as a deterrent against Russian expansionism."

Public support for joining NATO has increased hugely in both countries since Russia invaded Ukraine.

As a result, Helsinki and Stockholm seem unaffected by Moscow's mounting threats.

Last week, Russia warned it would deploy nuclear weapons in the Baltic region if Sweden and Finland join NATO, but defense analysts say Russia already has nukes there.

“It seems to me that Russia is clutching at straws right now," Dalsjö said. "They have their hands full with Ukraine, so I very much doubt that they will come here and kill anybody."

"Russia will be unhappy with Sweden and Finland joining, and it will make its dissatisfaction felt," Dalsjö said.

Sweden and Finland are the only Nordic countries not yet part of NATO.

Their addition would significantly improve the alliance's ability to defend itself against Russia, especially in the Baltic Sea.

"There will be NATO assets along the entire coast of the Baltic Sea, and that's a nightmare for Russian naval planners," Kelly said.

The two countries have yet to officially announce their intentions. They’ll likely do so before NATO's next big summit in June, where members could sign an accession document. That document would then have to be approved by lawmakers in each member country. That means two thirds of the U.S. Senate.

The full process usually takes years, but in the case of Finland and Sweden, it could be shortened to a few months, due to their advanced democratic and militaristic standards.