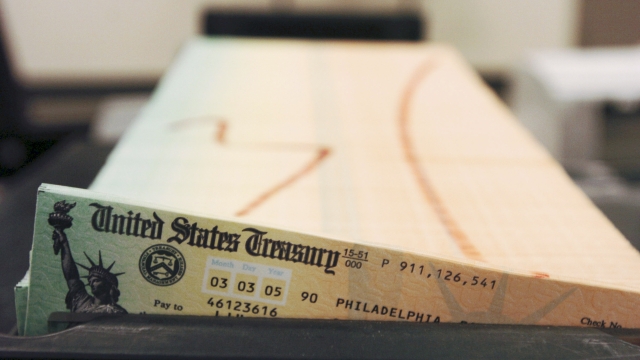 SMS
Retirement Debt: The Financial Burdens Facing Seniors
By Amber Strong
By Amber Strong
December 17, 2021
While not all debt is bad, the Government Accountability Office says those credit card bills with high interest rates will put a strain on the future.
SHOW TRANSCRIPT

Michelle Stauffer and her mother Evelyn Fisher have lived together since 2015.

Fisher says she likes to help out financially even though it isn't necessary.

"For my own peace, my head, I don't like to just be taken care of," Fisher said. "I like to contribute."

Stauffer likes knowing that mom is safe and sound. Fisher wasn't in debt when she decided to move in with her daughter but could feel the financial pressure starting to mount after her husband's death.

"I owned my own home, but everything was breaking on me and with my husband gone, I couldn't afford to do it on my own with what I had made," Fisher said.

The loss of one income can be the start of a financial spiral, particularly for seniors with limited mobility.

At 60 years old, the financial crunch came suddenly for Shara El after a divorce followed by a medical emergency. She eventually found work.

"I probably put out 500 applications. I stopped counting," El said. "I was making $9 an hour and I never knew what my income a week was going to be. It would be anywhere from 24 to 30 hours a week."

El was leaning on her pension as the bills and debt collectors piled on, and then she called nonprofit organization Helps and attorney Eric Olsen.

"Federal law protects her Social Security and pensions; that can't be garnished or taken from you," he said.

According to the Consumer Financial Protection Bureau, Social Security deposited directly into a bank account has layers of protection from debt collectors. And 85% of Social Security wages are protected from federal garnishment. But even 15% can be a lot.

"We talked to seniors that go without medicine or turn the heat down or go without food," Olsen said.

The former bankruptcy attorney started the Helps program after meeting low-income seniors who felt they had no way out. He informs them of their rights and helps them figure out their finances.

"My grandfather raised six kids during the Great Depression," Olsen said. "He was a big influence on me. He was poor, so, you know, I know what it's like for people to be poor."

According to the Government Accountability Office, seniors in the U.S. carry nearly half of the country's total debt. That debt can put a strain on the future.

"Auto debt. We don't hear a lot about auto debt, but that is a significant amount of debt that people carry, as well as credit card debt,"  AARP's Lori Trawinski said.

There are also mortgages and student loans. In fact, according to AARP, $336 billion of that debt comes from student loans, with 25% paying their children's loans.

"Sometimes it's people who decided to re-career at a later age," Trawinksi said. "And so they went back to school and borrowed to do that."

All of that debt then follows them into retirement.

"Individuals who are, say, 40 or 50 — you know, immediately pre-retirement — are carrying debt for longer. And then, when they retire, they aren't necessarily having new debt but are holding on to debt that they've taken in the past," said Patrick Hubbard with the Boston College Center for Retirement.

While not all debt is bad, the Government Accountability Office says those credit card bills with high interest rates will put a strain on the future, particularly those long-term-care costs.

"Research has documented that they rely really heavily on their children for caregiving, whereas if they'd had the assets to pay for long-term care or pay for a nursing facility setting, they wouldn't be placing quite that same burden on family members," Hubbard said.

"I think a lot end up on the streets and maybe didn't need to have that happen," she said. "And I know what that felt like. It's not fun."

Planning ahead helps, but it's hard to save money that you don't have in the first place. In that case, experts says people can look to things like income-based repayments as a way to ease the burden.