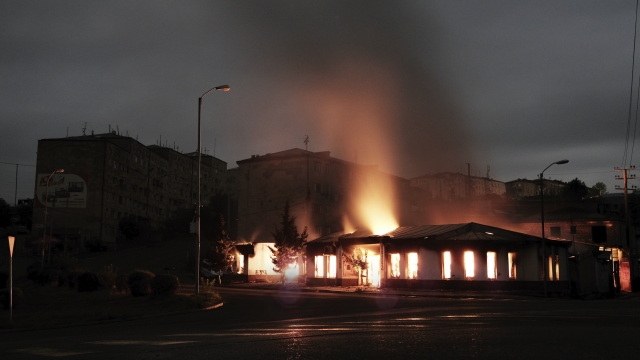 Fighting between Armenia and Azerbaijan continued Sunday with each side accusing the other of targeting civilians. The two sides have released conflicting death tallies for civilians and soldiers, with estimates ranging from over 100 to thousands.

Azerbaijan claims Armenian forces attacked its second-largest city of Ganja Sunday using heavy artillery and has vowed to retaliate. It also accused them of using internationally-banned cluster bombs. The country's foreign ministry says one civilian was killed and four wounded in the attack that targeted dense residential areas. Armenia's Defense Ministry says it hadn't opened any fire on Azerbaijan.

The ongoing violence is centered on the disputed territory Nagorno-Karabakh, which is legally part of Azerbaijan but has been controlled by Armenians for the past three decades. Earlier Sunday, Armenia had accused Azerbaijan of targeting civilians in the territory's main city.