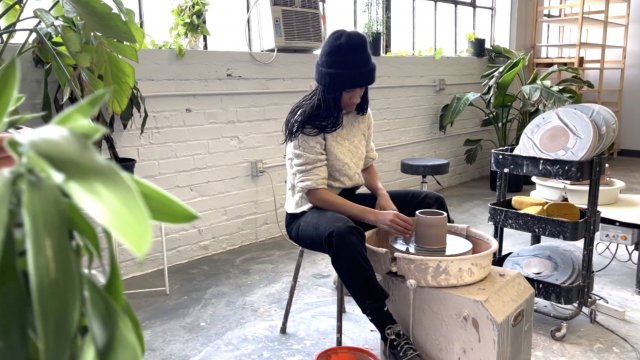 SMS
How A Female Black-Owned Ceramic Business Gained National Recognition
By Jessica Madhukar
By Jessica Madhukar
February 4, 2022
A woman who spent most of her days following the death of George Floyd out in the streets protesting began to see a rise in her business.

Ceramics started as a hobby for Lalese Stamps.

"What I just didn't really understand when I was younger was that I can create my own pathway," Stamps said.

Five years ago she was in a stable career path as a graphic designer. Pottery was simply just a fun way for her to step away from a screen and actually design pieces with her hands.

"I love it," Stamps said. "I love working with my hands."

But it wasn't until the summer of 2020 when her purpose — the business of Lolly Lolly Ceramics — began to take shape.

Stamps spent most of her days following the death of George Floyd out in the streets protesting.

It was then she noticed many began to reach out to her knowing of her hobby and wanting to support a small, female, black-owned business.

"Our brand just kinda got lumped into that where we saw this spike of support," Stamps said.

That spike led her to leave her job in graphic design, to pursue a career as a business owner and artist.

Since the big move, Stamps has been featured in magazines like Vogue, Architectural Digest, The New York Times and many more. She still creates each mug in Milwaukee.

"The fastest that our pieces have sold is 13 seconds, I believe," Stamps said.

As her pieces continue to be in high demand, so does her skill set. Stamps was recently invited to take her talents to New York for an artist residency with artist Solange Knowles — Beyonce's younger sister. Stamps says she's been manifesting this for more than a decade now.

"She's the epitome of making sure that Black culture, Black people are celebrated and remembered in history, so to be a part of that is super exciting."