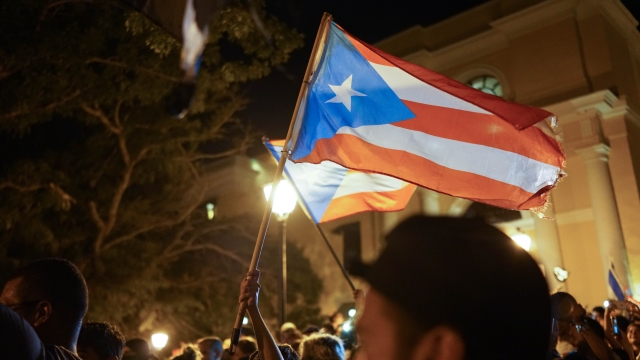 SMS
FEMA Restricts Puerto Rico Relief Funds After Governor Steps Down
By LeeAnne Lowry
By LeeAnne Lowry
July 26, 2019
Now the U.S. territory has to get FEMA approval to draw down grant funds for two hurricanes that hit in 2017.
SHOW TRANSCRIPT

FEMA announced it will further restrict Puerto Rico's access to federal relief funds. Now the U.S. territory has to get approval from the agency to draw down grant funds for hurricanes Irma and Maria, which hit in 2017.

FEMA said Thursday that the decision has to do with recent leadership changes in Puerto Rico. On Wednesday, Gov. Ricardo Rosselló stepped down after multiple scandals led to widespread calls for his resignation.

Rosselló's government is in the middle of a federal corruption investigation, and he's facing criticism for the way his administration is handling Hurricane Maria recovery amid the island's massive debt.

Roselló's departure is unlikely to remedy mistrust of the Puerto Rican government. His replacement, Secretary of Justice Wanda Vázquez, is facing allegations that she knew about, and didn't investigate, the mishandling of relief funds.