For Former Felons, A State Line Between Voting and Disenfranchisement 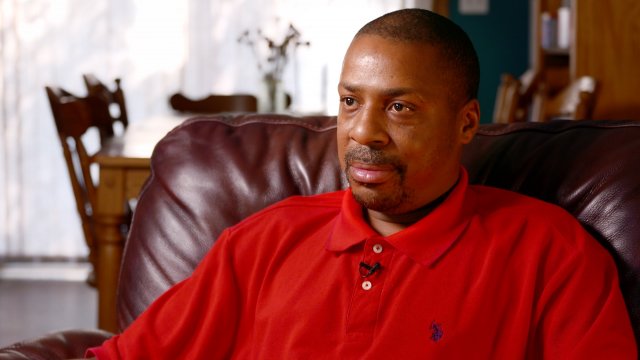 Kentucky & Iowa are the only two states in the country that bar their citizens from voting for the rest of their lives because of a felony conviction.

Eric Harris lives in Iowa City, IA but he's from Chicago. He left Illinois in 1999 with plans to start over — but you know what they say about old habits.

HARRIS: "I was in Chicago and I was involved in like, street gangs and being on the streets and doing all the type of stuff that was getting me sent away sent to prison. And I think that my mom, she just got to the point that she just couldn't watch it anymore. ... It was some good things, but it was some bad things that was going on around here. It was an active drug market, and I became involved in that. …  So what I started to do was, I started to rob other drug dealers, you know, to take them out of business … I just continued to do the things that I was doing in Chicago except in this atmosphere, I was able to get away with it more."

Ultimately, Harris racked up three non-violent felony convictions before he turned his life around. But it wasn't easy.

HARRIS: "It's easy to catch a criminal case. But it's hard to say, I don't want to be in trouble no more. … You go through lots of rejection and rejection is hard. … It's really easy to give up after three or four 'no's.'"

In Iowa, Harris overcame his past to become a husband, homeowner and college graduate. He's gainfully employed and even enjoys his job but he can't vote. Harris is one of more than 4 million former felons nationwide, also known as returning citizens, who are out of prison but still disenfranchised. And if he stays in Iowa there's a chance he'll never get to vote.

The Iowa law doesn't apply if Harris moves out of state, but he and his wife would have to find new jobs — which can prove extremely difficult for returning citizens like Eric.

Kentucky & Iowa are the only two states in the country that bar their citizens from voting for the rest of their lives because of a felony conviction. If only Eric Harris had been convicted on the east side of the Mississippi River, he would have his voting rights back, and the prison where he was incarcerated would be required by law to give him a civics lesson on his way out.

But because Harris was arrested and still lives on the west side of the Mississippi, the only way he can cast a ballot in 2020 is if the governor of Iowa personally approves it.

"Illinois has a trend of allowing more and more access to eligible voters. Whereas most of the states around us have gone backwards in terms of their policies," Ami Gandhi, Senior Counsel at the Chicago Lawyers Committee for Civil Rights, said.

Dr. Christina Rivers of DePaul University volunteers at Stateville Correctional Center just outside of Chicago. She credits the inmates at Stateville for recognizing a problem and working to get it fixed.

RIVERS: "We had done a really sort of very informal casual survey, you know, people talking to each other in the chow lines around the yard, or in their cells about, 'Hey, did you know that you got your voter eligibility restored, in Illinois, as soon as you walked out of the institution?' Most people said 'no.' … And so we were like, 'Ah, there's our answer.' Maybe we should create a bill that mandates, voter ed is part of the exit process."

With the help of Ami Gandhi, Dr. Rivers and local voting rights organization, Chicago Votes, inmates at Stateville Correctional Center crafted House Bill 2541. It passed the Illinois House and Senate with overwhelming support before making it to Gov. Pritzker's desk. The law is set to take effect January 1, 2020.

GANDHI: "The real work does begin now, in terms of making this law a reality. Implementation is the really important thing at this point in time … And so we will be impressing upon the corrections departments that this workshop really needs to be available and accessible for everyone."

Meanwhile, on the other side of the Mississippi River, The ACLU of Iowa is still working to clear the first hurdle — ending the lifetime voting ban for returning citizens.

Iowa Gov. Kim Reynolds did introduce an amendment to the state constitution back in January that would automatically grant former felons the right to vote, but it stalled in the Iowa Senate. Despite the setback, the ACLU of Iowa plans to push for this amendment again in the next legislative session.

ZENO: "Iowa has been a leader on a whole range of civil liberties issues. Iowa was one of the first states to legalize marriage for same sex couples, Iowa desegregated schools before the Brown versus Board of Education case. … But on this particular issue, Iowa is not even in the middle of the pack, or kind of at the end of the line. Iowa is literally all the way in the back of the line, right? And we don't have to be there."

That leaves Eric Harris and nearly 60,000 other returning citizens in Iowa with just one option — file a request with Governor Reynolds to have their voting rights restored and hope for the best.

HARRIS: "It makes you feel like less of a citizen, you know, because your input doesn't go into anything. It's just, you're here you pay taxes and that's it. You don't get to say who's going to be the next governor, who will be the next senator or the next president. It's like, you're from this country, but you're just standing around."

With the help of the ACLU, Harris plans to apply to have his voting rights restored. He's hoping to get a response in time to cast a ballot for the 2020 election.