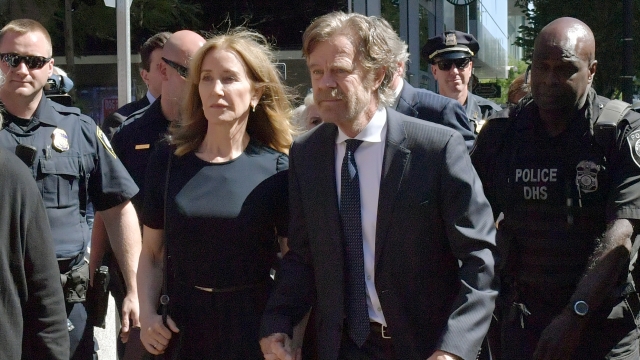 The actress will also have to pay a $30,000 fine and​ complete 250 hours of community service.

Actress Felicity Huffman has been sentenced for her role in the college admissions scandal.

On Friday, a federal judge sentenced Huffman to 14 days behind bars, a $30,000 fine and 250 hours of community service. She'll also have one year of supervised release. Prosecutors had recommended she serve one month in prison and pay a $20,000 fine.

Huffman pleaded guilty earlier this year to conspiracy to commit mail fraud and honest services mail fraud. The actress admitted to paying $15,000 to help her oldest daughter cheat on the SAT exam with the help of William "Rick" Singer, a college admissions consultant whom prosecutors say was the mastermind behind the scheme.

Huffman was one of 51 people charged in what the DOJ called the largest college admissions scam ever prosecuted. The plot was based on getting students accepted to elite universities with fake athletic credentials or by cheating on entrance exams. Prosecutors say some parents paid as much as $6.5 million to Singer, who then bribed coaches or paid people to take admissions tests or modify test scores. Prosecutors recommended a comparatively light sentence for Huffman, in part because she paid less than many other parents.

Huffman will have to report to prison on Oct. 25 to serve her two-week sentence. She's the first parent involved in the scandal to be sentenced, and other parents are scheduled to be sentenced in the coming weeks.