Felicity Huffman, 13 Others To Plead Guilty In College Admissions Scam 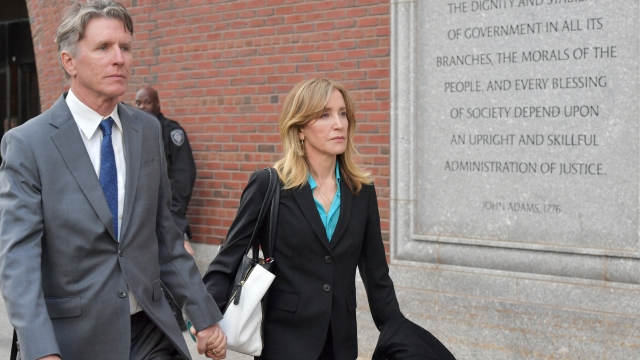 Actress Felicity Huffman and more than a dozen others will plead guilty in a nationwide college entrance bribery scandal case.

According to the Justice Department, the "Desperate Housewives" actress, 12 other parents and one coach agreed on Monday to enter a guilty plea. A date for the plea hearings hasn't been set yet.

In March, the Massachusetts District Attorney's office charged 50 people in six states with conspiracy for their alleged involvement in the college admissions scheme. That announcement made headlines when it was revealed that Huffman, along with "Full House" actress Lori Loughlin and her fashion designer husband Mossimo Giannulli, were among the accused.

The plot was based on getting students accepted to elite universities by using fake athletic credentials or cheating on SAT and ACT exams. Prosecutors allege some parents paid between $200,000 and $6.5 million to William Rick Singer to guarantee their children got in to colleges like Yale, Georgetown and Stanford. In exchange, Singer allegedly bribed athletic coaches or paid people to take or modify entrance exams.

U.S. attorneys say Loughlin and Giannulli agreed to pay $500,000 to get their two daughters fraudulently recruited as athletes by the University of Southern California. Huffman and her husband, who wasn't charged, are accused of handing over $15,000 to sign one of their daughters up for the exam cheating scheme.

The charges they face — conspiracy to commit mail fraud and honest services mail fraud — carry a maximum sentence of 20 years in prison, three years of supervised release and a fine of at least $250,000.

The DOJ says the defendants who took tax deductions for the bribe payments will work with the IRS to pay back taxes.

According to the Justice Department, this is the largest college admissions scam ever prosecuted.