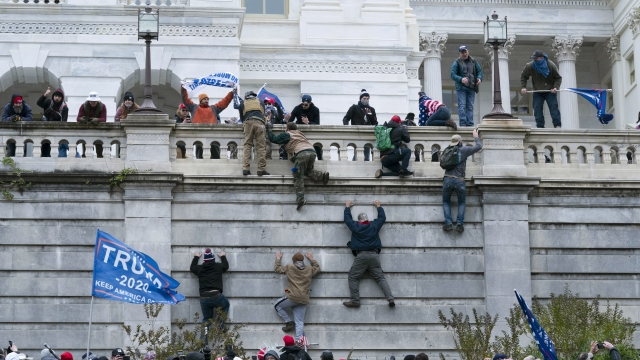 "We were normal, good, law abiding citizens, and you guys did this to us," a Trump supporter shouted. "We want our country back."

Rioters pushed through barriers and climbed through windows to get inside the Capitol building. Five people died as a result of the violence, including a U.S. Capitol Police officer.

Many people have posted on social media with feelings of stress and anxiety. Newsy spoke with Dr. Lynn Bufka of the American Psychological Association for ways to cope.

What is your advice to people who may be feeling this way? What are some things they should do?

"First of all, stop watching," Bufka said. "We probably have all the information we need from the videos and photos that we've seen so far. I would urge people if they need more information, if it's important to learn more, to turn to print media, to read where they can then control the pace of the news that they're getting and making the option of not fixing on images."

For many, Wednesday's events felt like an attack on democracy.

"For many people, those in the immediate area, there's going to be concerns about personal safety, about impact for their work, their job, their home," Bufka said. "But there's also questions for many individuals of this feels like a bit of an assault on what we understand the United States to stand for and democracy itself. And for many people, that's a more abstract kind of threat, because we don't necessarily know what to do about it."

She says during times of stress, it's important to get enough sleep, exercise and good nutrition. She also recommends distracting yourself.

"Distractions can be very healthy," Bufka said. "And I would encourage people to think about the things that bring them some joy, things that, perhaps it's playing with a pet or working a jigsaw puzzle, things that get us engaged a little differently than paying attention to news."