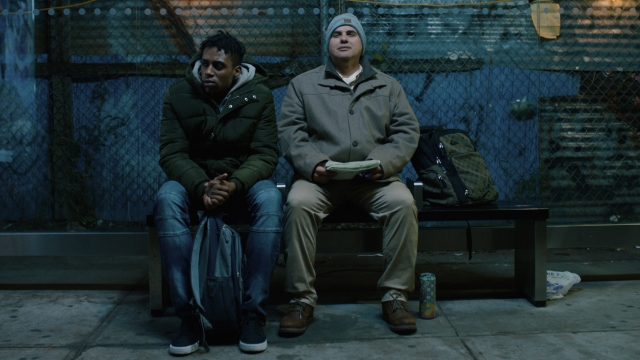 The Oscar-nominated short film "Feeling Through" is the first to cast a deaf-blind actor in a lead role.

"Feeling Through" tells the story of a chance encounter between a homeless teen and a deaf-blind man trying to get back home. The film is nominated for the Oscar for best live-action short film, and it's already made history as the first to cast a deaf-blind actor, Robert Tarango, in a lead role.

Doug Roland, director of "Feeling Through": "Robert being such a key part of cultivating that beautiful energy shows through in the story. And I think ultimately the film wouldn't be anywhere near what it is without Robert's participation."

Tarango was cast after a nationwide search with help from the Helen Keller National Center. Roland hopes the project, which was executive produced by deaf Oscar award-winning actress Marlee Matlin, can improve representation and accessibility in Hollywood.

Roland: "There's an obligation as a storyteller, regardless of genre, to reflect accurately the world that we live in, you know, and I think that means including the people that make it up."

Roland: "There's this perception that including someone with a disability on set is going to be costly and have this set of challenges and obstacles. … That's not the right lens to look through, because everything is challenging and harder on a film set."

Beyond making the set more accessible, Roland and the Helen Keller National Center also sought to screen the film for deaf, blind and deaf-blind audiences around the country — hiring about 50 interpreters per screening.

Roland: "I was sitting in the very back of the theater, and to see people experiencing this film in such different ways — tactilely, through audio description and visual interpreters — it completely redefined my understanding of what it means to experience a film."

Before the pandemic, "The Feeling Through Experience" — which included the short film, documentary and Q&A — was held at 14 different events around the country.

Roland: "The first person to stand up during the Q&A was a man who's deaf-blind who had the entire experience tactilely signed to him. … He said that people assume that because I'm deaf and blind, I wouldn't care to come out to the movies. But I love this, I love having a shared experience with people. I just never had the opportunity, because there's not the accessibility for me to do so."