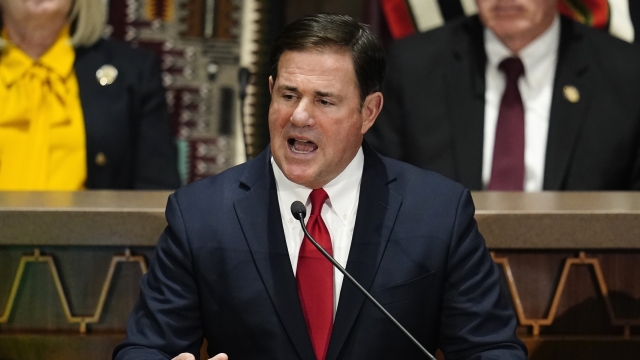 SMS
Justice Dept. Sues Over New Arizona Citizenship Proof Law For Voting
By Associated Press
By Associated Press
July 6, 2022
The law is in direct conflict with a 1993 federal voter registration law and also violates the Civil Rights Act of 1964, according to the DOJ.

The U.S. Department of Justice on Tuesday sued Arizona over a new law requiring people who use a federal form to register to vote to provide additional proof of citizenship if they want to vote for president or using the state's popular vote-by-mail system.

The law signed by Republican Gov. Doug Ducey on March 30 is in direct conflict with a 1993 federal voter registration law and also violates the Civil Rights Act of 1964, according to the Justice Department. The law adds requirements for the federal form directly rejected by the U.S. Supreme Court in a 2013 Arizona case.

The Republican-controlled Legislature was well aware of the federal law and the Supreme Court decision written by the late conservative icon, Justice Antonin Scalia. But they went ahead anyway, arguing the new law would boost election security.

Assistant Attorney General Kristen Clarke of the department's civil rights division called the new law that goes into effect in January "a textbook violation of the National Voter Registration Act."

She said the National Voter Registration Act has helped eliminate requirements that make it hard to register to vote.

"Arizona has passed a law that turns the clock back on progress by imposing unlawful and unnecessary requirements that would block eligible voters from the registration rolls for certain federal elections," Clarke said in a statement.

The law violates the Civil Right Act by requiring election officials to reject registration forms if they contain a mistake or leave out information that is not needed to determine someone's right to vote, she said.

Ducey said in a March 30 signing letter that the law is designed to address a growing number of voters who registered using the federal form who did not have to provide proof that they are citizens. The state's voters added the citizenship proof requirement in 2004 when they enacted Proposition 200, but it does not apply to the federal form.

The federal form requires a person to swear they are a citizen, but there is no proof requirement. Those who register using the form and do not respond to election officials' request for citizenship proof are only allowed to vote in federal elections. In 2020, just over 11,600 people were federal-only voters, but the number has since risen. Since the Supreme Court decision, Arizona has allowed those using the form who have not provided citizenship proof to vote only in federal elections.

Ducey spokesman C.J. Karamargin declined to comment, saying the administration doesn't comment on litigation. Republican Attorney General Mark Brnovich, who is running for U.S. Senate, told the Justice Department in a July 1 letter that he would defend the law to the fullest.

The bill would prohibit federal-only voters from voting by mail or voting for president. It would require state election officials to cross check registration information with various government databases to try to prove their citizenship, and report anyone they can't find to prosecutors.

The bill also requires people to include proof of their address with new voter registrations. Election officials say that's complicated and unnecessary because addresses are verified at the time of voting, and voting rights advocates say it will make registering voters more difficult.

The Legislature's own lawyers told lawmakers that much of the measure was unconstitutional, directly contradicts the 2013 Supreme Court decision and is likely to be thrown out in court. It passed with support from only majority Republicans.

Voting rights advocates worry the bill is an attempt to get back in front of the now more conservative Supreme Court.

"Election integrity means counting every lawful vote and prohibiting any attempt to illegally cast a vote," Ducey said in a letter explaining his decision to sign the bill.

He called the bill "a balanced approach that honors Arizona's history of making voting accessible without sacrificing security in our elections."

Rep. Jake Hoffman developed the bill along with the conservative Heritage Foundation, and said the measure is about eliminating opportunities for fraud, though cases of noncitizens voting are extremely rare.

Hoffman and other supporters say it affects only the roughly 31,500 voters who have not shown proof of citizenship. Voting advocates say it's vague and could go much farther, affecting hundreds of thousands of people who haven't recently updated their voter registration or driver's license.

The Justice Department lawsuit is the third to be filed challenging the law since it was passed. Voting rights groups filed the first two challenges, which have been merged into one case.