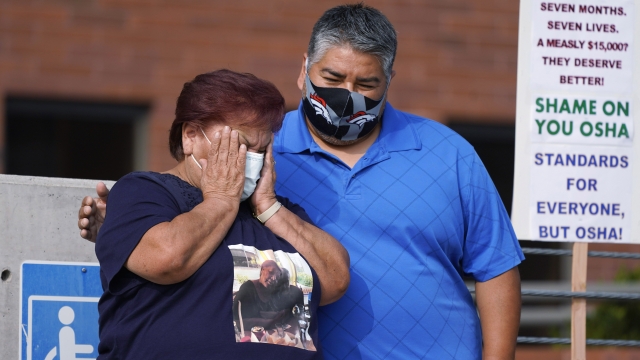 SMS
What Happened To Biden’s Plan To Fight COVID-19 In Workplaces?
By Patrick Terpstra
By Patrick Terpstra
April 8, 2021
Sources tell Newsy OSHA drafted new standards but has yet to release them as opposition mounts from business interest groups.
SHOW TRANSCRIPT

Early in the pandemic, hundreds of people tested positive for coronavirus who all worked at JBS Foods, a huge meatpacking plant in Greeley, Colo.

"I put my family at risk every day by going to that job and coming home," a whistleblower told Newsy affiliate Denver7 at the time.

OSHA issued fines totaling $15,615 against JBS Foods, which strongly disputes claims that it failed to protect its employees against exposures to COVID-19.

"For a multi-billion dollar company it’s not even a slap on the wrist," said David Michaels, who served as OSHA administrator for former President Obama and is now a professor at the George Washington University School of Public Health.

Michaels points to the JBS Foods case as an example of why he says OSHA needs to issue new regulations to protect workers against contracting coronavirus on the job.

OSHA missed a March 15 deadline, set by an executive order signed by President Biden, to decide whether to issue emergency temporary standards for practices like mask wearing, social distancing and hand-washing breaks.

Data from OSHA shows the federal agency has received a flood of COVID-related safety complaints, more than 14,000 since the pandemic began.

The regulator had issued just 372 citations as of March 4.

Two sources outside but close to OSHA tell Newsy the agency drafted COVID standards in mid-March but never released them.

In a statement, a spokesperson for the Department of Labor said OSHA is still trying “to learn about best practices and challenges in mitigating the spread of COVID-19 in the workplace” and is "taking the time to get this right."

"We just really question whether or not this is the time for OSHA to take such an extraordinary step," said Ed Egee, vice president of government relations for the National Retail Federation.

The group, along with the U.S. Chamber of Commerce, was included on stake-holder calls with OSHA in March.

Both associations said they told OSHA that the many businesses they represent are protecting their employees and customers on their own following CDC guidelines for safe workplaces.

Neither interest group would rule out challenging new OSHA mandates in court if and when they come down.

Michaels says, without new standards, there’s not much OSHA can do.

"Most employers are law-abiding and they try to follow the law," Michaels said. "Right now, it’s just a bunch of suggestions out there so it’s easy to say well we don’t need to do this."

OSHA declined to say when new COVID workplace protections may be coming.