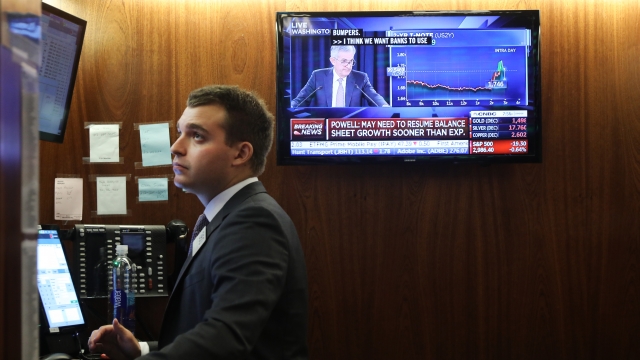 On Wednesday, the Federal Reserve slashed interest rates for just the second time since the 2008 recession. The central bank set the new rate at between 1.75% and 2%. The move apparently irked President Trump, who's pushed for deeper cuts to match rates elsewhere in the world.

Chairman Jerome Powell said the Fed acted to sustain an 11-year period of economic expansion amid weak investment, uncertain trade markets and slowed growth abroad. He said the Fed is not forecasting a recession and that the U.S. is experiencing its lowest unemployment rate in 50 years.

The decision passed in a 7-3 vote after a two-day meeting, underscoring questions about whether it was necessary to lower the rate given such a positive outlook. The central bank has adjusted the benchmark eight other times since President Trump took office, most recently in July.

U.S. stocks fell before and after the announcement, and the rate-setting Federal Open Market Committee is reportedly divided over what to do next.

Some Fed officials worry Wednesday's move could undermine confidence in the Fed as an independent entity. But supporters of Wednesday's decrease say it's meant to keep credit lines open, especially in the event of a global downturn.

And that reasoning's not without merit. Recent months have seen several events that could seriously impact the global economy, including the U.S.' ongoing trade war with China, a spike in oil prices and the possibility of a no-deal Brexit.

This week, the central bank and New York Reserve injected $128 billion into the economy to offset funding shortages.

The U.S. economy is driven largely by consumer spending, which remains strong. And although President Trump has criticized the Fed for cutting rates too slowly, he certainly wants to keep markets strong and stable heading into the 2020 election.