Maryland Judge Dismisses DACA Challenge, Then Trump Tweets About It 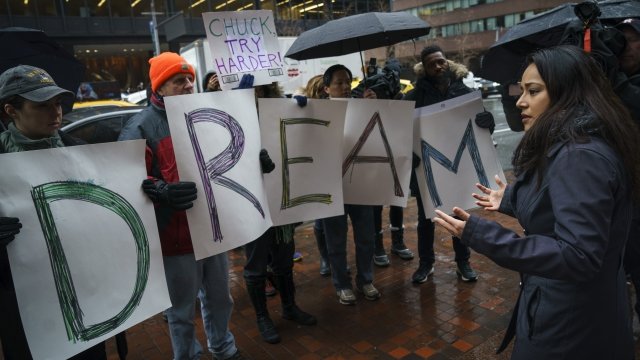 SMS
Maryland Judge Dismisses DACA Challenge, Then Trump Tweets About It
By Lindsey Pulse
By Lindsey Pulse
March 6, 2018
A federal judge in Maryland struck down a challenge to the Trump administration's decision to end the Deferred Action for Childhood Arrivals program.
SHOW TRANSCRIPT

President Donald Trump tweeted that Democrats are "running for the hills" after a federal judge in Maryland dismissed a challenge to the Trump administration's decision to end the Deferred Action for Childhood Arrivals program.

The judge said Monday even though he disagrees with the administration's choice to wind down DACA, it's not the court's job to intervene.

The federal government technically missed its March 5 deadline to act on DACA, but that deadline was effectively tossed after multiple court challenges.

The Maryland judge emphasized his displeasure with the DACA situation and said, "Hopefully, the Congress and the President will finally get their job done."