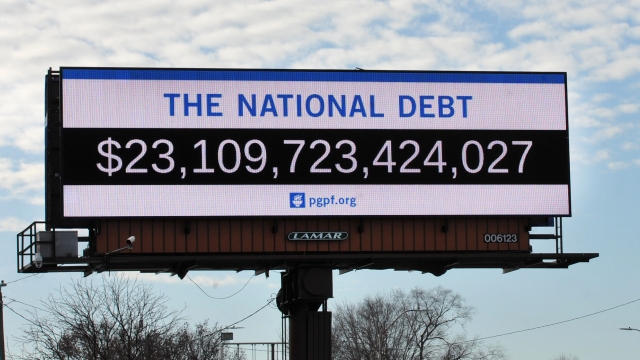 SMS
CBO Projects Federal Budget Deficit To Hit Record $1.7T In 2030
By Bailey Vogt
By Bailey Vogt
January 28, 2020
The CBO released a report saying, if nothing changes, the deficit would hit 4.6% of the U.S.' GDP this year.
SHOW TRANSCRIPT

The Congressional Budget Office said Tuesday it projects the annual budget deficit will hit $1 trillion this year, and could hit a record $1.7 trillion by 2030.

The national debt is how much money the U.S. has spent that it technically doesn't have. At the time of this story, it's at about $22 trillion and growing. The federal budget deficit is the difference between how much the U.S. expects to collect in taxes and how much we're actually spending. That number can vary depending on how close the U.S. can get spending to the budget. For instance, in 2019, the federal deficit was at $984 billion. Compare that to 2015, when it was at about $439 billion.

CBO Director Phillip L. Swagel said "that debt path would dampen economic output over time," and would lead to a stagnation of household incomes and a rise in interest rates.

Swagel also said the 2017 GOP tax cut and increases in defense and domestic spending have contributed to the deficit's rise.

The CBO did share a bit of good news about the economy's growth, as it's expected to hit 2.2% instead of a projected 2.1%.