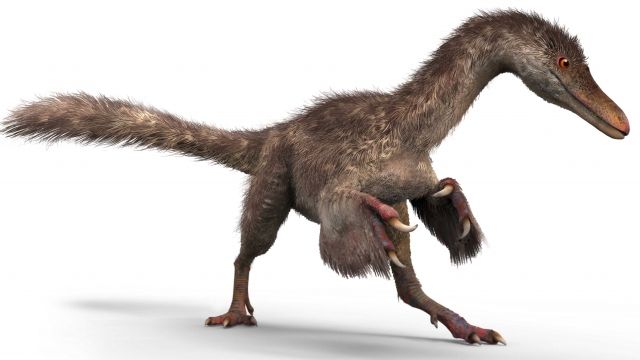 SMS
In Case You Forgot, Dinosaurs Were Actually Feathery
By Evan Thomas
By Evan Thomas
December 8, 2016
Paleontologists have discovered more dinosaur feathers preserved in amber — the fluffy plumage might have been common.
SHOW TRANSCRIPT

Paleontologists just unearthed a 99 million-year-old chunk of dinosaur tail preserved in amber. It came from a relative of the Tyrannosaurus rex and the velociraptor — and it's covered in feathers.

This is the latest example of how paleontologists have had to change their thinking about what dinosaurs looked like. The popular image of them as scaly, like reptiles, has turned out to be wrong in a lot of cases.

SEE MORE: New Dinosaur Fossil Has A Lot In Common With Its Bird Relatives

Instead, fossil evidence suggests both meat-eating and plant-eating dinosaurs sported feathers. Now, scientists think they were a widespread dino trait: Even T. rex, scourge of Jurassic Park, might have had some colorful plumage.

It just took us a while to figure that out because traditional fossils don't usually preserve the delicate feathers — and we only started finding them trapped in amber like this a few years ago.

And when we do find them, the feathers don't always look like feathers. The ones on this preserved tail don't have the stalk you see running down the middle of a modern bird's feather. That took time to evolve.