The FDA Is Cracking Down On E-Cigarette Sales To Minors 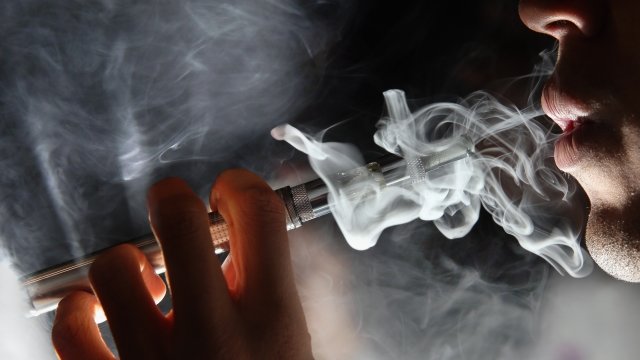 The FDA is taking swift action to combat teen vaping.

Flavored e-cigarette sales will now be limited to in-person locations where age restrictions are enforced, which could mean no more sales at places like gas stations and convenience stores. They'll still be available online, but subject to strict age-verification processes.

It's important to note that those restrictions won't apply to tobacco, mint or menthol e-cigarette flavors. That's because the FDA says those flavors help adult smokers transition away from traditional cigarettes.

According to FDA Commissioner Scott Gottlieb, moving toward a ban on menthol cigarettes is necessary because more than half of young smokers use them.

In addition, the agency will also propose a policy to ban flavors in cigars.

The moves come as new data released Thursday shows an almost 80 percent increase in high school student vaping from 2017 to 2018. Around 3.6 million middle and high school students reported that they were currently using vape products in 2018.

Earlier this year, the FDA started an industry-wide crackdown on brands that it claims market to young people, and manufacturers have started to respond.

Juul said on Tuesday that it's temporarily stopping sales of most of its flavored e-cigarette products in stores. Altria announced a similar restriction, and Blu e-cigarettes' manufacturer told CNBC it'll raise the minimum age purchase requirement.

The FDA said it's prepared to take additional steps if the youth vaping rate doesn't decline after the proposed changes.