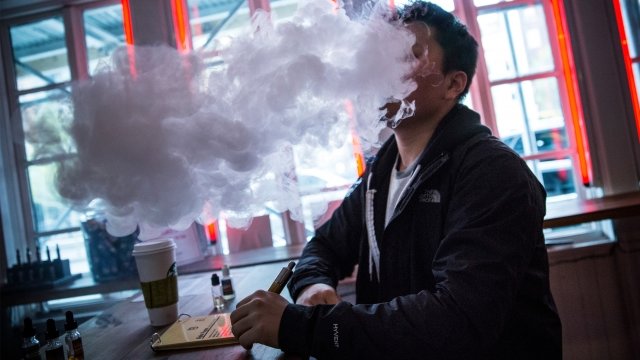 SMS
FDA Warns Of 'Disturbingly Sharp Rise' In E-Cigarette Use Among Teens
By Andrea Gonzales
By Andrea Gonzales
September 19, 2018
The FDA is spending $60 million on an education campaign warning teens of the dangers of e-cigarettes.
SHOW TRANSCRIPT

"There's an epidemic spreading. It can expose your lungs to acrolein, which can cause irreversible damage. It's not a parasite. It's not a virus. It's vaping."

That's a new ad paid for by the FDA. The agency is spending nearly $60 million on an education campaign warning kids about the dangers of e-cigarettes.

The FDA commissioner said in statement recent data shows a "disturbingly sharp rise in the number of teens using e-cigarettes" in the past year. The FDA hasn't released the numbers yet, but it says the amount is so shocking it felt an obligation to act now.

Electronic cigarettes are now the most popular form of nicotine among middle schoolers and high schoolers.

Though vaping e-cigarettes may pose less of a risk than smoking tobacco and may help adults quit smoking traditional cigarettes, the FDA commissioner said the opportunity to help "can't come at the expense of addicting a generation of kids on nicotine through these same products."

Nicotine in e-cigs can negatively affect a person's brain and overall health. It's also highly addictive, especially in teens.

The ad campaign is being funded by user fees collected from the tobacco industry instead of taxpayer dollars. And the FDA has given the five biggest e-cigarette manufacturers 60 days to tell the agency how they'll address their products' widespread availability to kids.