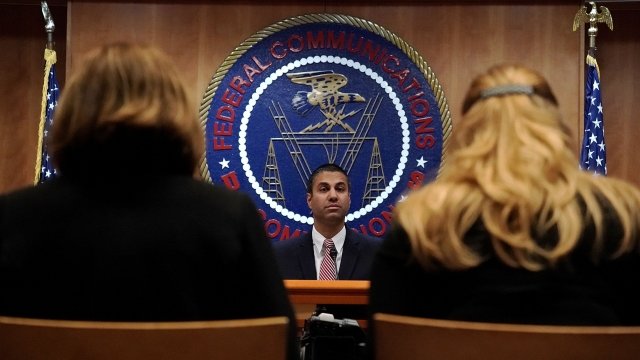 A story Monday shook up wireless companies, showing that President Donald Trump's team had proposed — and later seemed to abandon — a plan to have the government run the country's next generation of wireless networks. Many groups, like Trump's own Federal Communications Commission, warned that nationalization stands no chance.

According to the plan, the U.S. wanted to build a nationwide 5G network as a matter of national security. Officials wanted a network that could compete with China's wireless industry and protect the U.S. against potential Chinese cyberattacks.

After the story ran, four of the five Federal Communications Commission chairs, including Republican Chairman Ajit Pai, released statements condemning the plan. And that carries some weight: The FCC regulates the broadcast spectrum the government would've used for 5G.

The commission voted 3-2 to scrap the Obama-era rules that aimed to keep the internet open and fair.

Pai stressed he'd shoot down "any proposal for the federal government to build and operate a nationwide 5G network" because wireless providers would drive more investment and innovation than the government could. Another Republican commissioner said the president's team didn't understand U.S. commercial wireless companies were already "the envy of the world."

The proposal even drew ire from a Democratic commissioner who recognized while "there is a worldwide race to lead in #5G," the pitch to build a reliable government-run network "misses the mark."