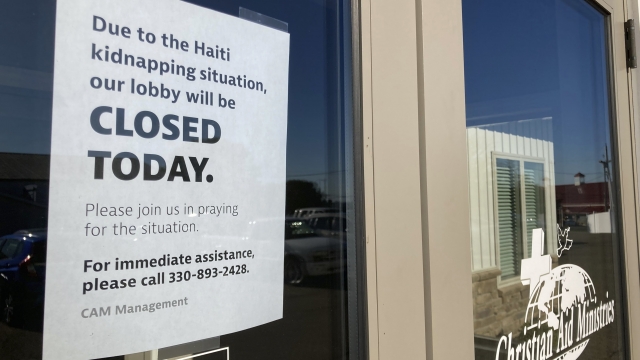 SMS
FBI Working To Rescue Abducted Missionaries In Haiti
By Ben Schamisso
By Ben Schamisso
October 19, 2021
According to Haitian officials, the 400 Mawozo gang is demanding $17 million in ransom for the 17 missionaries who were kidnapped near Port-au-Prince.
SHOW TRANSCRIPT

The FBI is still working to rescue 17 missionaries in Haiti as a notorious gang holds them hostage. The gang now wants $17 million as ransom for the group, according to a top Haitian officials.

U.S. agents are working with Haitian authorities to try and secure the release of the 12 adults and five children who are part of the Ohio-based Christian Aid Ministries. They were kidnapped near Port-au-Prince after visiting an orphanage.

Meanwhile, Haitians are voicing anger over worsening crime, and many have gone on strike. Thousands of workers across the country are demanding basic security from their government.

The 400 Mawozo gang and others have terrorized Haiti for years. Foreigners make headlines, but it's everyday Haitians who bear the brunt of the crisis.

The White House refuses to say more, but the Haitian official who revealed the gang wants a $17 million ransom is also saying the negotiations could take weeks, with the goal being to get the hostages released without paying a dime.