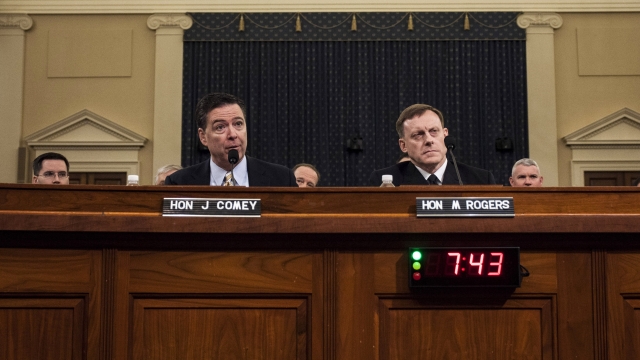 SMS
FBI Director Fact-Checks Trump's Live Tweet During Hearing
By Lauren Stephenson
By Lauren Stephenson
March 20, 2017
President Trump's tweet about the testimony came up during the second half of the House hearing on Russian attempts to meddle in the 2016 election.
SHOW TRANSCRIPT

President Trump's Twitter commentary of a congressional hearing made its way into the hearing while the hearing was still going on.

And those testifying — FBI Director James Comey and National Security Agency Director Mike Rogers — were able to clear up some confusion for the president and his 16.2 million Twitter followers.

That's not exactly the case. But based on the video clip included in the tweet, followers wouldn't know.

"Do you have any evidence that Russia's cyber actors changed vote tallies in the state of Michigan?" House Intelligence Committee Chairman Devin Nunes asked.

"How about the state of Pennsylvania?" Nunes asked.

"The state of Wisconsin? Nunes asked.

"I have nothing generated by the National Security Agency, sir," Rogers said.

"Director Comey, do you have any evidence that the FBI — that any votes were changed in the states that I mentioned to Admiral Rogers?

But the FBI and NSA can't really say Russia didn't influence the electoral process because their investigations aren't looking into that. And that was stated in the testimony — before Trump tweeted.

"Did the intelligence community ever do an analysis as to whether the dissemination of that adverse information in a closely fought election had any effect on the American electorate?" Rep. Jim Himes asked Rogers.

"No, sir. The U.S. intelligence community does not do assessments on U.S. policies or U.S. opinions," Rogers said.

So Rep. Jim Himes had Comey and Rogers address the tweet.

"So it's not too far of a logical leap to conclude that the assertion that you told the Congress that there was no influence on the electoral process is not quite right?" Himes asked.

"It certainly wasn't our intention to say that today because we don't have any information on that subject. That's not something that was looked at," Comey replied.