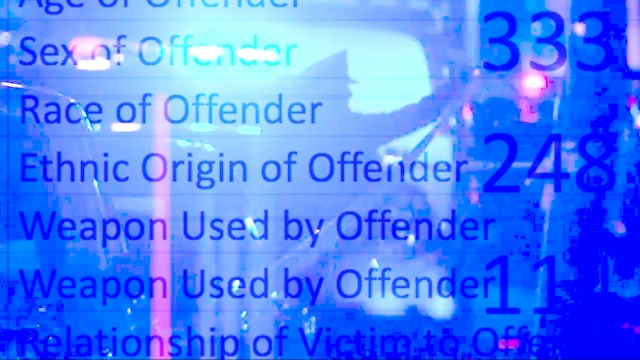 To help fight domestic violence and other crimes, researchers need access to strong, dependable crime data. But Newsy has learned the FBI is going to stop collecting crime data for its Uniform Crime Report (UCR) from an estimated one in four police agencies across the nation.

"It's a devastating blow to effective public policy," said Josh Sugarmann, the executive director of the Violence Policy Center, which advocates against gun violence.

The Violence Policy Center has for more than a decade used the UCR data to track hot spots in crime. Each year, it produces a report highlighting trends in how and where women are murdered by men.

Understanding and combating the problem has become all the more urgent during the pandemic, as potential victims are often stuck inside with abusers.

"In June of 2019 we had nine homicides related to domestic violence," Phoenix police Sgt. Mercedes Fortune told KNXV-TV. "In June 2020, we had 17."

Sugarmann said calling out the worst performing states year after year in reports has led to important reforms in the regions where the most serious problems were discovered.

"The result has ranged from spurring a Pulitzer Prize winning series down in South Carolina to passing laws in other states based on the findings of our work, to statewide review boards," said Sugarmann.

For many years, the FBI has collected counts of different crimes from local police agencies. For homicides, however, the FBI has long encouraged reporting of expanded data for homicides that allow researchers to spot regions with disproportionate violence against certain races, genders, or ages. This additional data also has information on the weapons used and the relationship of the victim to the killer. Newsy has learned the FBI is about to stop collecting that and other crime data from thousands of the nation's police agencies who will miss a deadline to upgrade their crime reporting methods.

"I can't stress enough the impact that this will have across the board," said Sugarmann. "They're taking away an essential tool not just in understanding lethal violence, but in preventing it."

So what happened? The FBI has been trying for decades to move more than 16-thousand of the nation's law enforcement agencies over to its newest version of the Uniform Crime Report -- the National Incident-Based Reporting System (NIBRS). The new system has been widely praised as a more detailed and transparent way of reporting crime.

“NIBRS isn’t just about names and numbers, it gives a picture of the circumstances and who the victims are," the FBI said in a promotional video about the transition. "Our crime statistics reporting must catch up with available technology and public expectation."

NIBRS first went online in the late 1980s. For years, many agencies resisted the change to the more detailed crime disclosures NIBRS requires. The FBI then launched a campaign that included testimonials from local police chiefs who encouraged others to sign on. In 2015, the FBI set a final deadline: January 1, 2021.

But as of the latest annual release of crime data the FBI made in September, covering crime in the United States for all of 2019, only 51 percent of the nation's police agencies that participated in the UCR program submitted their data via NIBRS.

The transitions to NIBRS can often take local agencies years and can involve millions of dollars in upgrades to computer systems. The Department of Justice has made grants available to help police agencies who want to make the upgrade.

But with January fast approaching, the FBI acknowledges many agencies will likely fail to meet the deadline. Bureau officials said they would still take reports for 2020 crimes from non-NIBRS participants but said they will stop accepting the data from those agencies about any crime that takes place after January 1, 2021.

That means crime data from those agencies will no longer be a direct part of the national uniform crime report, until such time as they come online. That includes a number of detailed data collections including expanded data on homicides, information about assaults on police officers, and detailed data on arrests police make of persons under the age of 18.

FBI officials said the strict deadline was initially set to help local agencies in their attempts to gain traction and funding needed in their communities to make the switch.

Instead of allowing local agencies who miss the deadline to continue reporting their specific crime data, the FBI is partnering with the Bureau of Justice Statistics (BJS) to create national estimates to account for what information they will lose.

"We are forecasting that the estimates will cover approximately 25% of the law enforcement agencies in the US," the BJS said in a statement.

The BJS forecast took into account information from an FBI survey in April, which the bureau said showed 75 percent of the nation’s law enforcement agencies indicating they were committed to transitioning to NIBRS by the deadline. However, in a statement to Newsy, BJS cautioned even that prediction might be overly optimistic.

"While the FBI’s assessments suggested the majority of agencies will transition by the 2021 deadline, some agencies have been delayed by COVID-19 and other social issues affecting resources and daily operations," the BJS said in the statement. "Agencies are working to develop contingency plans, and BJS and the FBI are working to assess the impact on their transition timelines."

The FBI declined to release the names of police agencies who are not expected to meet the deadline, saying "the information is only available for internal FBI use until public release."

Newsy reached out directly to the 50 largest agencies in the country. San Francisco, Phoenix and others said they won't make the deadline.

"SFPD is in the process of working with State and Federal partners, through a Federal grant, to become compliant in 2022," a San Francisco police spokesperson said in a statement.

Many agencies, including the NYPD in New York City, the San Jose Police Department and the Palm Beach County Sheriff's Office, either did not respond to questions about when they would make the transition or said they did not know the answer.

"Our current legacy system does not support NIBRS," a Palm Beach County Sheriff's spokesperson said in a statement. "We are in the process of migrating to a Records Management system that does support NIBRS reporting. Unfortunately we do not have a date at this time."

The FBI said in a September press release the FBI has certified 39 states to allow agencies to report crime information to them via NIBRS. The FBI's crime data website says 10 states still used the older non-NIBRS method to submit their most recent crime data,  including New York, California, Florida, Maryland, Minnesota and New Mexico. FBI officials said they were actively working with all states that have not yet been certified to report through NIBRS.

Researchers say losing crime reports from any sizable number of police agencies, will create an information gap for an unknown period of time at the local level. That would make it harder to put a community’s crime risk in context with other cities or states on everything from issues with racial justice to how many police officers are assaulted in local jurisdictions.

"It's certainly not adequate for reliable criminological research. But I don't think it's adequate for the general public either," said Dr. Richard Rosenfeld, the past president of the American Society of Criminology and professor at the University of Missouri-Saint Louis.

Rosenfeld used detailed FBI data about homicides that will go away for non-NIBRS agencies to make a discovery that could help communities experiencing a rise in domestic violence.

But Rosenfeld said the city-by-city comparisons that underpinned the research won't be possible with just national estimates. In a statement, the FBI said its national estimates will include some of the detailed categories researchers often delve into, such as victim and offender characteristics, weapon involvement, and location type.  But the bureau confirmed, "Data for agencies not yet completing the transition to NIBRS by January 2021 will be accounted for in the estimation methodology."

"We don't simply need that national level figure," said Rosenfeld. "I think there would be a great loss by doing away with those subnational data, which are so very important both for criminological research but I would argue for public policy."

FBI officials confirmed to Newsy they will not provide state or local crime estimates in the near future.

Rosenfeld says without one standardized way of reporting crime, overseen by the federal government, some local agencies may revert to defining certain crimes in ways that are different than other communities.

"We have to be able to compare your community with other communities," said Rosenfeld. "If we lose the ability to make those reliable comparisons, then criminological research will certainly suffer. It'll be a tremendous loss."

Mark Greenblatt is senior national investigative correspondent and Mark Fahey is senior data reporter for Newsy and the Scripps Washington Bureau. Follow them @greenblattmark and @marktfahey. Email a story tip to mark.greenblatt@scripps.com or mark.fahey@scripps.com.