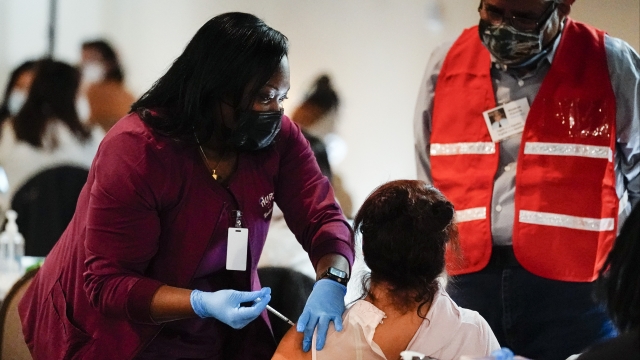 More Americans are getting vaccinated against COVID-19 every day, as the rate of new cases in the U.S. hits a plateau. But Dr. Anthony Fauci says that plateau is "disturbingly high."

And he says the U.S. is at risk for a new surge, as there hasn't been a continued decline in case numbers amid the spread of highly contagious variants.

"The way we're looking at it now, it's almost a race between getting people vaccinating and this surge that seems to want to increase," Dr. Fauci said.

The U.S. has now had more than 31 million cases and more than 560,000 deaths. And now experts say the variants are to blame for a rise in new cases in the Northeast and in the Midwest, like in Michigan. A variant outbreak there has overwhelmed its public health system, and the state is approaching its pandemic high of daily cases - set back in November.

Elsewhere, Georgia is the third state to temporarily shut down a vaccine site after eight people there reported adverse reactions to Johnson & Johnson's shot. Meanwhile, other states - including California - are expected to see their supplies of the J & J vaccine plummet due to production problems.

Other nations are experiencing vaccine shortages, too. Some 60 countries, including many poor nations, are experiencing vast delivery delays after a major factory in India suspended exports. The World Health Organization is blasting a "shocking imbalance" in global vaccination rates.

This comes as the CDC and global agencies are encouraging massive vaccination campaigns to curtail the pandemic.

"These trends are pointed to two clear truths, said CDC Director Dr. Rochelle Walensky. "One, the virus still has hold on us, infecting people and putting them in harm's way and we need to remain vigilant, and two we need to continue to accelerate our vaccination efforts and to take the individual responsibility to get vaccinated when we can."