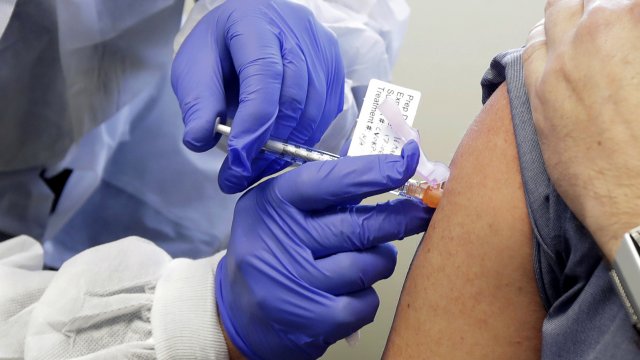 President Donald Trump's coronavirus task force has been blocked from communicating with President-elect Joe Biden's transition team, who will meet with vaccine makers this week.

The president has delayed the typical handoff to the next administration — a situation the nation's top infectious disease expert says is especially problematic amid the pandemic.

"I've been through multiple transitions now, having served six presidents for 36 years," Dr. Anthony Fauci said. "And it's very clear that that transition process that we go through, that time, the period that measured in several weeks, to months is really important in a smooth handing over of the information as well as it's almost like passing the baton in a race. You don't want to stop and then give it to somebody, you want to just essentially keep going and that's what transition is, so it certainly would make things more smoothly if we could do that."

Biden's chief of staff, Ron Klain, told NBC Sunday that despite the delay in normal transitioning, the president-elect's staff will huddle with Pfizer and other pharmaceutical companies in the coming days.

Pfizer recently announced its vaccine data shows 90% efficacy, and other vaccine makers are also in their final phase of testing.

While Fauci says he expects those vaccines to be highly effective as well, he says says high-risk groups like hospital and nursing home workers will get them first. Most Americans will most likely have to keep up preventative measures like social distancing well into next year while they wait for their doses.

Still, Fauci said relative normalcy could return by spring or summer of 2021.

Biden's outreach to vaccine manufacturers comes as the pandemic reaches a dangerous phase in the U.S. The U.S. is adding about 1 million new cases each week, and deaths are averaging a 33% increase in just two weeks.