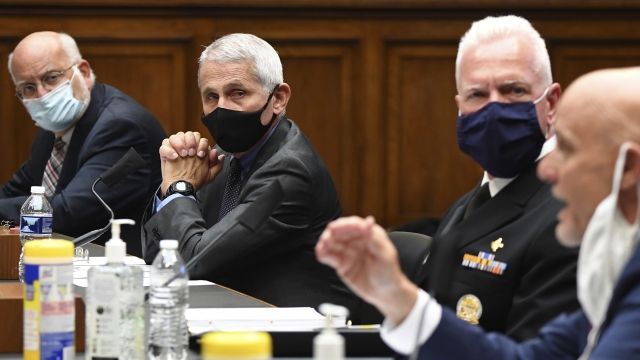 SMS
Dr. Fauci Says COVID-19 Testing Will Ramp Up, Not Slow Down
By Alexandra Miller
By Alexandra Miller
June 23, 2020
Members of the Coronavirus Task Force testified before the House Energy and Commerce Committee about the Trump administration's response to COVID-19.
SHOW TRANSCRIPT

On one side of Pennsylvania Avenue, President Trump told reporters his suggestion to slow down coronavirus testing was no joke. But up on Capitol Hill, four members of the White House Coronavirus Task Force testified it's just not the case.

Doctors Anthony Fauci, Robert Redfield, Stephen Hahn and Adm. Brett Giroir told members of Congress that not only is more testing necessary, but it's in their current plans as the world looks to a possible resurgence in the fall.

Fauci reminded members the U.S. is still in the middle of the first wave and the outbreak is not currently under control. As the president traveled to Phoenix for his second rally in four days, the experts continued to urge social distancing. The Trump campaign is handing out masks at rallies but not requiring supporters to wear them nor social distance.

Still, the experts say the U.S. is now more prepared for future spikes than it previously was, between additional testing, masks and PPE for front-line workers. Though they're predicting a vaccine could be ready by the beginning of next year, FDA Commissioner Hahn says they'll only approve a drug when it's safe and successful for Americans, not under the administration's timeline.

All experts asked that Congress not only continue to sustain funding for their respective agency efforts, but also work to be more prepared in the interim, should another pandemic strike in the future.