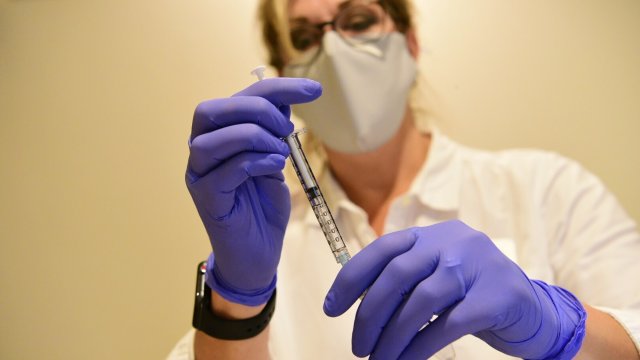 SMS
Fauci Uses Concern Over New COVID Variants To Promote Vaccinations
By Newsy Staff
By Newsy Staff
February 8, 2021
According to CDC data, around 59 million doses have been delivered, but only about 41 million have been administered.
SHOW TRANSCRIPT

Health officials in the U.S. have expressed concern about new variants.

And Dr. Anthony Fauci has used it to make his case to ramp up the vaccination effort.

The rollout has not been smooth and there's still a big gap between the number of doses distributed and those actually put into the arms of Americans.

According to CDC data, around 59 million doses have been delivered.

But only about 41 million have been administered.

About 31 million people have now gotten at least one dose.

But of those, just over 9 million have gotten both shots. That's less than three percent of the U.S. population.

The U.S. has averaged a million or more vaccinations per day over the past two weeks but the rate has dipped a little recently.

"So even though there's a clear, clear discrepancy between the demand and the supply that will get better as we get through February and into March," said Fauci. "We certainly, I guess, could have contracted a little bit more aggressively with the companies to get more doses. But right now this is what we have. The, these are the contractual arrangements."

The immunization effort would get a boost if the FDA greenlights Johnson and Johnson's vaccine candidate.