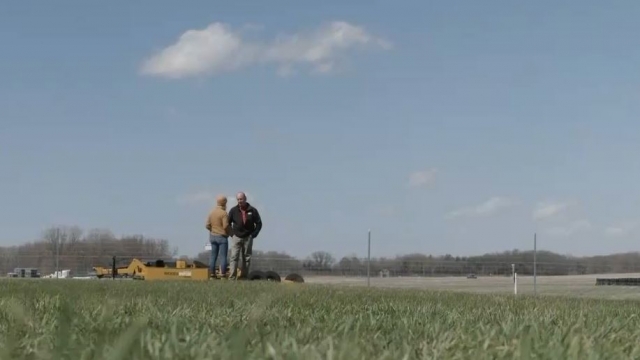 SMS
Farming's Next Frontier: Solar Energy
By Meg Hilling
By Meg Hilling
April 22, 2022
Indiana's solar industry has been booming. It's projected to grow to be the 4th largest in the U.S. over the next five years.

For farmers across America, planting season is well under way.

"In this in this area, I've had some mint here, you know, peppermint, seed corn, commercial corn, soybeans," said Indiana landowner Norman Welker.

But rather than seeds, a group of farmers in Northwest Indiana are putting steel piles into their ground. The reason? To harvest something other than crops from these fields.

"We're collecting the sun's energy and turning it into, you know, into immediate use power," said Welker.

Norman Welker is one of roughly 60 landowners in Starke and Pulaski counties who are renting their land to Doral Renewables for the creation of one of the largest solar farms in the U.S.

"We're farming the sun, yep. Except we're able to harvest it every day of the year instead of just, you know, from that April to September timeframe," said Welker.

Known as the Mammoth Solar Project, the $1.5 billion effort is broken into three sections spanning 13,000 acres – with the actual solar panels being placed on roughly 20% of that land. Officials with Israeli-based Doral Renewables say when the farm is fully completed it will generate 1.6 gigawatts of energy annually -- that's enough to power more than 275,000 homes.

"When you look at the output of the entire project, it's on par with a nuclear power plant." "The first phase should be operational by the end of 2023," said Kevin Parzyck, Senior Vice President for Development at Doral Renewables.

So how does this all work? Think farm to table, but instead of food, it's electrons. Energy collected at panel sites, will be carried by transmission lines to the grid system, and then delivered into homes as far away as the East Coast.

Indiana's solar industry has been booming, it's projected to grow to be the 4th largest in the U.S. over the next five years. But the projects have seen some pushback across the Hoosier state, ranging from accusations of money grabs by local officials, to a fear of losing precious farmland and the lifestyle that goes along with it.

"A lot of people look at this as a red-blue kind of issue. What's interesting is most renewable projects are in red communities, are in agricultural areas," said Parzyck.

"I see it being the future," said Doug Podell, a landowner in Pulaski County.

For families like Doug and Cheryl Podell, the project is giving them a chance to build for the future and also preserve their past.

"We have a son, and he wasn't really interested in farming. I've since rented our farmland out and I thought it'd be a good way to keep the land and the family for the next generations," said Podell.

"In many cases, we're saving the family farm, because we're just leasing the property. They're getting it back after 30 years, and they're going to be in a much stronger financial position," said Nick Cohen, President and Co-Founder of Doral Renewables.

As for the impacts on the farmland?

"We don't have to do anything to the land. All we have to do is simply hammer the pilings in for the racks, that's it. And there's no bedrock, there is no land grading, it is simple," said Cohen. "So, we're not cutting down trees, we're not going into wetlands, we're putting very generous setbacks in so that people can't see them. The solar panels are recessed into the field."

Which farmers like Welker say will provide the land a much-needed break.

"We do a lot, you know, a lot of intensive activity. And, and we will now be able to, you know, give it a rest," said Welker.

"40 years from now, or 50 years from now, when we take all these things out, this land is going to be some of the most prime land because it's going to have been untouched for that amount of time. And so, it's actually going to help the ground," said Parzyck.

So, while the sun may not seem like a typical thing to harvest, the farmers say they're still business partners with nature.

"It's just another form of farming the sun. We're doing that with solar panels," said Cohen.