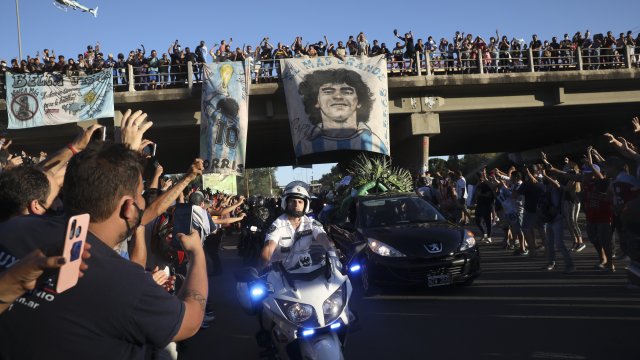 SMS
Fans Mourn Soccer Legend Diego Maradona As 'Man Of The People'
By Ben Schamisso
By Ben Schamisso
November 27, 2020
One of the greatest in sports, Maradona faced scrutiny over scandals but was idolized for remaining true to his impoverished roots.
SHOW TRANSCRIPT

Tens of thousands of fans in Buenos Aires paid tribute to Argentine soccer superstar Diego Maradona on Thursday as his body lay in state in the presidential palace before being escorted to a private burial ground.

Considered one of the best players in history, Maradona led his country to the 1986 World Cup title.

In life, he faced public scrutiny over drug addictions and other scandals. Yet he was idolized in Latin America as a man who remained true to his impoverished roots.

"For me there is no more football. It's over. The ball was punctured, it was punctured yesterday. I love you, Diego," said Fernando Moro, a Maradona fan.

Emotions ran high on Thursday by the palace with fans singing, weeping and climbing over fences to say their last goodbyes to their idol.

Famed for his "Hand of God" goal against England in the 1986 World Cup quarterfinals, Maradona was also adored in Naples and Barcelona, two of his former clubs.

After his retirement from soccer, Maradona befriended leftist Latin American leaders and remained loyal to people like Fidel Castro and Nicolas Maduro even when their regimes turned increasingly authoritarian.

"He was quite interested in politics, used to fight for the underdog in that way. He obviously had an extraordinarily colorful life, both on the field and off the field. And I suppose the flaws in some way add to the overall picture," said Lineker.

Maradona died Wednesday of a heart attack at age 60. He was recovering from a recent brain surgery. Argentina declared three days of national mourning.