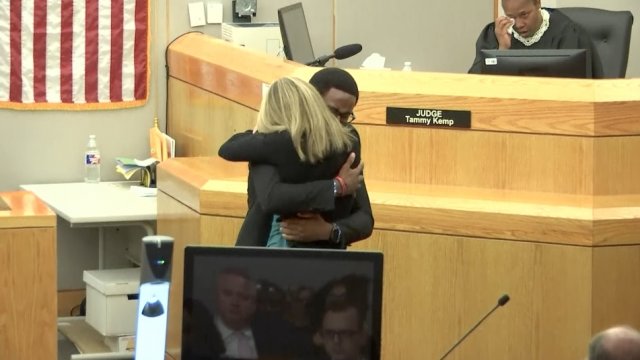 "We, the jury, find unanimously that the defendant did not cause the death of Botham Jean while under the immediate influence of sudden passion arising from inadequate cause and assess the defendant's punishment at 10 years' imprisonment in the Texas Department of Criminal Justice."

A Texas jury deliberated for less than two hours before handing down its sentencing for Amber Guyger. The ex-Dallas police officer was found guilty of murder on Tuesday.

After the verdict of the sentencing, Botham Jean's brother Brandt took the stand to tell Guyger he forgives her and that he hopes she goes to God with her guilt.

"I think giving your life to Christ would be the best thing that Botham would want you to do. Again, I love you as a person, and I don't wish anything bad on you. I don't know if it's possible, but can I give her a hug, please?"

Judge Tammy Kemp also reportedly spoke to Guyger about scripture and shared her Bible with the ex-police officer.

This case was one of many in the national controversy around police violence against black people. Not many police officers have faced trial for shooting deaths, and few of those who have were convicted. Guyger said Jean's killing was "not about hate" but about her fear of being attacked. During her trial, evidence showed Guyger had made offensive statements about Martin Luther King Jr. and her black colleagues.

After the verdict, Jean's mother told reporters that Guyger will have 10 years of reflection, but that the Dallas Police Department needs to improve. She referred to contamination of evidence and poor officer training. She said: "If this was applied in the way it ought to have been taught, my son would have been alive today. If Amber Guyger was trained not to shoot in the heart, my son would be standing here today. He was not a threat to her."

Activists were vocal throughout the hearing, shouting, "No justice, no peace," and "Black lives matter" in the hallway outside the court room. They were unhappy with Guyger's sentence and planned protests against the Dallas Police Department outside of the courthouse Wednesday evening.

One protester said: "Ten years is not enough. Botham Jean's life mattered." The activists are demanding better oversight for police shootings and how they are investigated. They also want the president of the Dallas Police Association to step down.

Police Chief Reneé Hall talked to reporters about her efforts to reinstate trust in the community. "I acknowledge that there are things we need to change. There are areas of concern that we need to address, and I pledge that we will make those changes."

Chief Hall also said there will be an internal affairs investigation into allegations of tampering with evidence and failure to render aid during a shooting, among other things, that arose during the trial. She said if they are true, the police department will make the necessary policy or procedural changes needed.