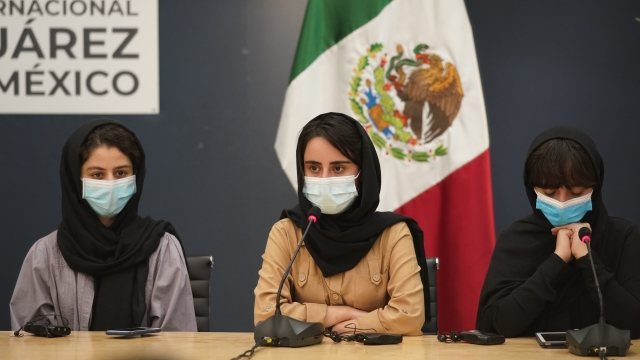 SMS
Families of All-Girl Robotics Team Rescued In Afghanistan
By Sasha Ingber
By Sasha Ingber
August 25, 2021
They spoke with Newsy about their dangerous, 24-hour trip to escape the country.
SHOW TRANSCRIPT

Girls from the Afghan robotics team fled the country last week. And they had to leave behind their families, who have remained in peril.

An ambitious operation to save them began Tuesday morning with a vehicle secretly collecting them from safe locations, and a former interpreter for the U.S. military brought on to help.

We had been following 30-year-old Elyas Ibrahimi after the Taliban entered Kabul. His numerous attempts to get himself, his sister, and elderly father to safety at the airport were stressful and unsuccessful.

Now, through a series of text messages, he told Newsy about the attempt that worked — a dangerous, 24-hour trip. It came the same day the Taliban announced they would stop Afghans from evacuating.

"We are not in favor of allowing Afghans to leave," said Taliban spokesman translator Abdul Qahar Balkhi.

The group was blocked at a Taliban checkpoint. Elyas called it "bad luck." The families feared militants would kill or arrest them. Hours passed. Some tried to leave the vehicle and there wasn't enough food or water. Elyas tried to keep them calm and translated negotiations between an international rescue team and Taliban fighters.

"We have been nothing but open with the Taliban about who we expect them to let in," Pentagon spokesperson John Kirby said. "Not every step of this process is in our firm control. And that there are going to be instances where it doesn't work as advertised."

Finally, the Taliban let the group through. As of Wednesday, they were at Hamid Karzai International Airport waiting for a flight out.

Elyas says they're feeling "happy" and "safe," with U.S. troops nearby. Talking about Tuesday's ordeal, and sharing stories about how life has changed in the last few days. The future for Elyas, these families, and their ambitious daughters are now a little brighter.