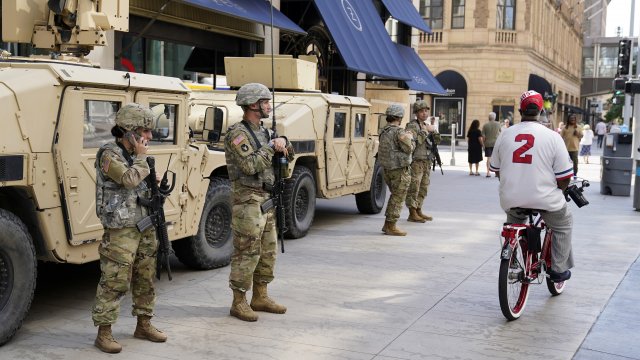 SMS
False Information Escalates Anger At Protests Across The United States
By Sasha Ingber
By Sasha Ingber
September 2, 2020
From Portland to Chicago to Washington, D.C., falsities on social media have fooled both liberals and conservatives alike, and escalated confusion.
SHOW TRANSCRIPT

False information is adding fuel to fiery protests across the country — the president himself amplifying them.

"We had somebody get on a plane from a certain city this weekend and in the plane it was almost completely loaded with thugs wearing these dark uniforms, black uniforms with gear and this and that."

That assertion made the rounds as the summer unrest started: Idaho law enforcement corrected a fake claim that a “plane load” of leftwing Antifa members were headed to Boise.

"It got a lot of attention right off the bat, the first couple weeks. But even now, several months later, that post still continues to get some comments and stuff made on it," Lt. Andy Creech, at the Payette County Sheriff's Office in Idaho, told Newsy.

Distorted information spread on social media can be difficult to source and has fooled both liberals and conservatives alike, their anger and confusion spilling onto streets — and not easily cleared up. Recently in Minneapolis, some demonstrators mistook the suicide of a Black man who was being pursed by police as another fatal shooting. An activist tells Newsy the police contacted her with video evidence to show they were not responsible for his death.

"The activists who were already downtown let me know that things were about to spiral out of control because of the rising tension and the anger that people felt," says Nekima Levy Armstrong, a civil rights attorney and activist. "It was difficult trying to convince them that the man had killed himself."

"We cannot let the actions of some destroy the fabric of our city and who we are as proud Chicagoans," Chicago Mayor Lori Lightfoot told reporters.

The list of falsities goes on in other parts of the country: A viral video purporting to show a “child militia” deployed for protests in Atlanta? Adult members of the National Guard. In the nation’s capital, rumors of fires and outages under the hashtag “DCblackout.”

"We have no idea who's responsible for this event," Linvill went on to say. "But I would say that that sort of triple trick that this D.C. blackout event pulled is classic Russian."

And in Portland, Oregon, video of a bible burning, filmed by a Russian state-funded media outlet, was described as a “stack” of bibles, inciting more rage. It’s something the nation saw during the 2016 election.

"We know from the actions of the Internet Research Agency and Russian agents in 2016 that racial division in the US was something they targeted a lot. And, you know, this is another opportunity for them to do that. And they are no doubt, you know, seizing on it," says Peter Adams, senior  vice president of education at the News Literacy Project.

Facebook says in August, it removed accounts and pages linked to Russia’s Internet Research Agency — after being tipped off by the FBI. The bureau tells Newsy in a statement, it provided information “to better protect against threats.”

"When falsehoods are repeated enough times, when we hear them enough times, they can take on a kind of truth. It diminishes the impact of assembly and organized protest," Adams says.