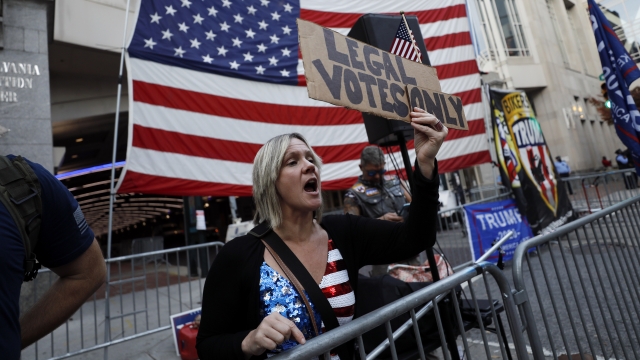 Legal experts are watching what happens in Trump v. Boockvar, an election challenge filed by the president in a Pennsylvania federal court.

“I think you could see a blueprint here for other cases that they file in other states,” said Caroline Polisi, adjunct lecturer at Columbia Law School. "This case is a federal case on its face, and it is a sort of a hodgepodge of every legal theory that they've made up until this point."

The case seeks to block Pennsylvania from certifying President-elect Joe Biden’s win, depriving him of the state’s 20 electoral votes.

A central complaint in the lawsuit says not all counties allowed voters to correct, or “cure,” their mail-in ballots.

Many states offer ballot curing for mail ballots so a vote won’t be discarded for a minor mistake.

Pennsylvania doesn’t require counties to offer ballot curing, so some offered ballot corrections while others did not.

“The remedy for it is that they simply throw out all the mail-in ballots, and that’s never going to happen,” Polisi said.

The Trump campaign is also challenging votes that arrived during a three-day grace period after Election Day allowed this year because of delays in U.S. mail delivery.

Newsy contacted the seven counties listed in the lawsuit to ask how many ballots arrived late but were still legally able to be counted.

Montgomery County got back 1,008 ballots in the same period.

Those are two of the three biggest counties in the state.

In total, Pennsylvania's secretary of state has said about 10,000 legal votes came in during the days after Election Day.

Even if a judge were to reject counting those ballots, it still would be nowhere near enough for President Trump to overcome Biden, who was up by more than 60,000 votes as of Friday.

Getting the courts to disregard legal ballots also would be unprecedented and unconstitutional, according to civil rights attorney Kristen Clarke at the National Lawyers’ Committee for Civil Rights Under Law.

“This is a post-election attempt to disenfranchise eligible voters,” Clarke said. “The several counties at issue in this case are home to some of the Commonwealth's largest numbers of Black voters and voters of color.”

The lawsuit also alleges that Republican observers did not have enough access to watch vote tabulations.

It’s true all observers, Republican and Democrat, were initially kept 20 feet or more away in places, but both parties had the same view of vote counting, also live-streamed online.

“We know that the count process itself was incredibly transparent,” Clarke said.

The lawsuit is a thick 86 pages, but most significant to the courts might be what’s not offered by President Trump’s lawyers in the case: evidence of widespread illegal voting.

“They’re saying the states are going to have to prove to us that there is not widespread voter fraud, and that’s not the way it works in court,” Polisi said.

Accusations of potential voting fraud haven’t been enough for judges who’ve quickly dismissed a list of other Trump election claims.