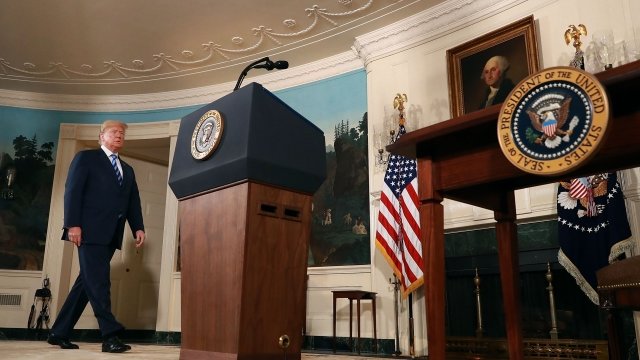 The president explained his decision to leave the Iran nuclear deal, but some of the reasons he gave don't tell the whole story.

On Tuesday, President Donald Trump said he was pulling the U.S. out of the Iran nuclear deal. He noted a few reasons why, but not all of his claims told the whole story. Let's take a look.

"Over the years, Iran and its proxies have bombed American embassies and military installations, murdered hundreds of American service members and kidnapped, imprisoned and tortured American citizens."

Now, Iran has been found responsible for many attacks on U.S. citizens, and some believe we shouldn't make concessions because of that. But supporters of the deal defended it, saying the goal is to prevent Iran from obtaining nuclear weapons. Even former President Barack Obama, who championed the deal, said in a statement, "the JCPOA was never intended to solve all of our problems with Iran."

Iran's President Tells Government To Get Ready For Uranium Enrichment

Hassan Rouhani was on TV just minutes after President Donald Trump announced the U.S. was pulling out of the Iran nuclear deal.

"In fact, the deal allowed Iran to continue enriching uranium and, over time, reach the brink of a nuclear breakout."

Yes, Iran is allowed to continue enriching uranium, but only low-strength uranium that's not powerful enough to be used in a nuclear weapon. The deal also limits how much uranium the country can stockpile, and both those restrictions would continue till 2030.

As for the nuclear breakout, under the deal's restrictions it would take Iran at least a year to develop a nuclear weapon.

As Newsy previously reported, Israel's announcement didn't really contain any new information. Much of the evidence Israeli Prime Minister Benjamin Netanyahu pointed to was already revealed in a 2015 report.

Nations acquire nuclear weapons for all sorts of reasons, and it's rarely about actually setting off the bomb.

" ... It also fails to address the regime's development of ballistic missiles that could deliver nuclear warheads."

This is true. Under the deal, Iran was allowed to continue its missile development. But developing a missile and developing a nuclear warhead to fly on that missile are not the same thing.

Trump's announcement puts the future of the Iran deal for the remaining countries in question.