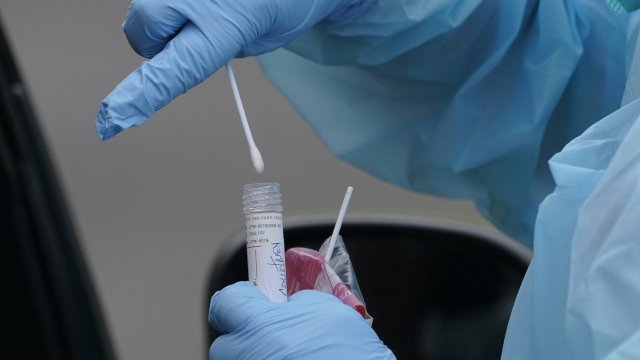 Health care workers are now able to test for the flu and COVID-19 at the same time. If you have both at once, it's called a co-infection. But this time, media has latched on to a nickname: "flurona."

It started with a headline out of Israel, calling a pregnant woman with flu and COVID the country's first case of "flurona." Some misunderstood that to mean the first case ever of a new illness.

It's not. But social media and news outlets picked up the name and it's stuck.

Dr. Jonathan Grein is helping sort it out.

A medical diagnosis of co-infection of any kind is nothing new. And at this point, Dr. Grein says co-infections of flu and COVID aren't something to panic about.

"There does not seem to be a major signal that infection with both makes you significantly more sick, but we just don't know, and it's too early to know," Grein says. "Common sense would dictate being infected with two things is certainly not good."

Co-infections aren't the norm. Grein says his hospital has only seen a few people with flu and COVID at the same time. Just like co-infections elsewhere in the country, all the cases were mild and in younger patients.

Experts say that's because the younger you go, someone has less immunity because they haven't been exposed to as many viruses. Unvaccinated people who are very social, don't mask are more likely to get a flu and COVID co-infection. Elderly and immunocompromised people are more prone to having both illnesses turn severe.

To prevent from being one of those people, medical experts say get your shots. You can get a flu and COVID vaccine at the same time.