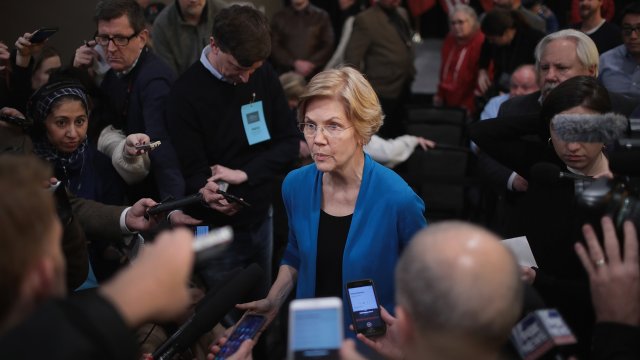 Sen. Elizabeth Warren has pitched the idea of taxing the net worth of the richest Americans. And while defending her "Ultra-Millionaire Tax," she said "the top 0.1% ... own about the same wealth as 90% of America."

When she says "wealth," she's not talking about income. She's talking about net worth — that's the value of everything someone owns, like cars, jewelry and furniture, minus any debt, such as credit cards, school loans and mortgages. A family or individual's net worth doesn't need to be reported to the government, so trying to compare who's "wealthiest" takes a bit of guesswork.

Warren's numbers come from an analysis by two U.C. Berkeley economists. They used income tax return data to calculate wealth, and they found that the bottom 90 percent of U.S. families hold about 25 percent of the country's wealth. Their analysis puts the top 0.1 percent's share at right around 20 percent. So based on this data, Warren's statement seems to check out — there's just a 5 percent spread between the groups, which could be considered "about the same."

But there's more than one way to crunch the numbers. Our partners at Politifact noted another net worth study that estimates the bottom 90 percent of Americans have a little less than 30 percent of the country's wealth, while the top 0.1 percent hold about 15 percent. Those numbers are a little farther apart than the ones Warren cited, and it would be a stretch to say they're "about the same."

So there are a lot of different ways to analyze economic data, and changing the parameters can impact the numbers. Warren's larger point seems to focus on the disparity between the country's richest people and everyone else, and several estimates do back that up.