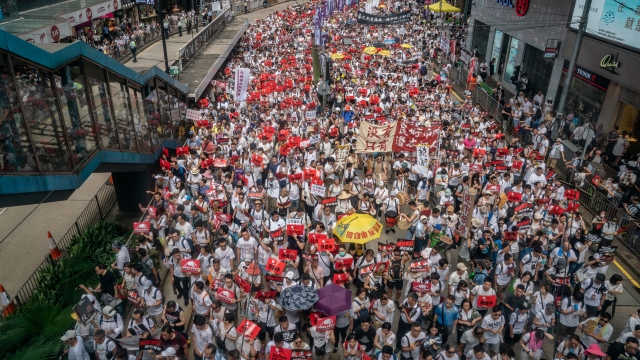 Twitter and Facebook have taken down numerous accounts they say are tied to a Chinese state-run disinformation campaign to undermine the Hong Kong protests.

On Monday, Facebook announced it had removed several pages, groups and accounts "involved in coordinated inauthentic behavior as part of a small network that originated in China and focused on Hong Kong." It said the people involved "engaged in a number of deceptive tactics," including using fake accounts "to manage Pages posing as news organizations, post in Groups ... and also drive people to off-platform news sites." Facebook said it "conducted an internal investigation" after receiving a tip from Twitter.

Twitter said it took down nearly 1,000 accounts related to the disinformation campaign. It also updated its advertising policies, saying it would no longer "accept advertising from state-controlled news media entities."

Both platforms shared examples of the posts made by these entities. One compares protesters to ISIS soldiers, with the caption: "Protesters. ISIS fighters. What's the difference?" Another post simply says, "cockroach soldiers," with an image of protesters' faces photoshopped onto the bodies of cockroaches.

The companies' actions follow a massive march in Hong Kong on Sunday. Organizers said as many as 1.7 million people turned out for the protest, making it the second-largest march of the movement so far. Hong Kong's government noted that the protest remained peaceful but reiterated that officials will begin working with protesters after the demonstrations have stopped.