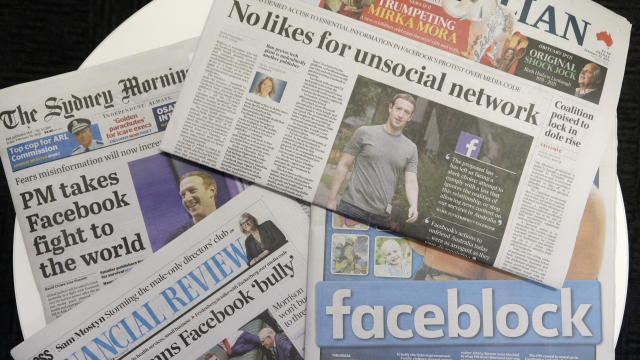 Facebook’s move came after Australian lawmakers advanced a law that may become the first in the world to force tech platforms to pay news publishers.

Facebook has implemented a wide ban on Australian users and other news publishers from sharing news on the platform.

The move comes as the Australian government is expected to pass a new law that would require big tech platforms to pay news publishers in order to host their content. Facebook said the law "fundamentally misunderstands the relationship between our platform and publishers," and chose to stop allowing news content instead of complying with the law.

"We woke up in this part of the world and all news sites — that's Australian and any news group from around the world — you can post on Facebook, but you won't be seen in Australia," said Maria Ressa, CEO and Co-Founder of Rappler.

Experts say that the Australian law is part of a global search for ways to move money from flush social media platforms to struggling news organizations.

"The idea is really twofold. One, the social media platforms benefit considerably from having news content posted on their sites and they ought to pay for it, which is under most circumstances they have not been doing. And the second idea behind this is that legacy news organizations are suffering terribly all around the world," said Paul Barrett, Deputy Director at New York University's Stern Center for Business and Human Rights

"Facebook was looking to how Australia responds to this pressure as a test case for how other countries may also push back against Facebook's practices," said Matt Grant, a Lecturer of Public Relations at the University of Southern Queensland.

Ressa’s news outlet — based out of the Philippines — has even been affected by the ban.

"We're fact checking partners with Facebook. So, of course, I tried to understand their perspective. It's kind of like a pass-the-buck situation because they do look at it as Australian-government initiated," said Ressa.

"Philippine government sites that we have flagged as a fact checker for Facebook for lies along with the accounts that amplify them, are still seen in Australia. I face 10 criminal cases that the Philippine government has filed in less than two years. And yet the world's largest distribution platform of news, has now solidified in Australia, at least," said Ressa.