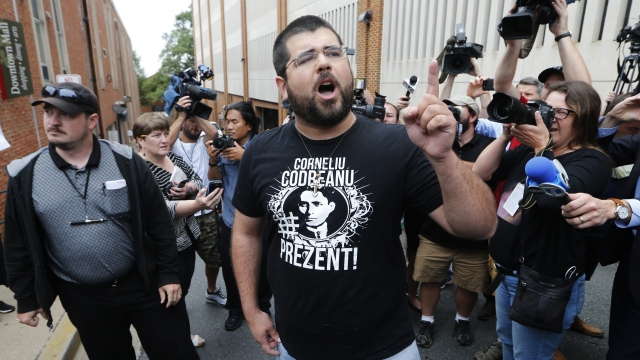 Content advisory: What you are about to read contains highly disturbing ideas.  Newsy is reporting on them because they speak to a trend of growing national security concerns.

Matt Heimbach, a self-described radical extremist who played an instrumental role in getting white supremacists to attend Charlottesville's deadly Unite the Right rally, plans to relaunch his old hate group as soon as this weekend.  In an interview with Newsy Heimbach says he now supports violence and killings in what he says is a revolution against rich corporate executives, global elites and even those who have caused global warming. "These people have names and addresses. Their kids have names and addresses, and the capitalist class, by hook or by crook, has to be liquidated. You know that it's called class war for a reason. " Heimbach said. "Any violence the proletariat brings is simply in self-defense. "

Newsy:  Some people will say that Matt Heimbach is off his rocker and he's advocating for harming or harming certain people?

Heimbach: How many cities need to be swallowed by the ocean before we could all just look around and say, these specific people did this? Because they did.

"What Heimbach is doing is he's lighting a match and he's handing the matchbook to somebody else," said Heidi Beirich, co-founder of the Global Project Against Hate and Extremism.  She says this type of rhetoric is especially concerning coming from Heimbach, who spent years building networks with Neo-Nazis and other extremists in the United States and internationally. "He's been in this movement for a long time. There may be somebody out there who picks up this idea. They're going to hear this rhetoric and the scary thing is that somebody might act on it."

Newsy:  You won't pull the trigger yourself. But you'll  applaud if it were to happen?  Heimbach: If they did the right thing, wouldn't you?

Heimbach: I mean, wouldn't you?

Heimbach was dubbed the 'Little Fuhrer' by the Southern Poverty Law Center as he rose to become one of the most recognizable faces for White nationalism in America.  He co-founded the Traditionalist  Worker  Party in 2015 - a neo-Nazi group that advocated for a racially pure White ethnostate.   The group’s members and Heimbach created a coalition of White nationalist groups, showed up at key Nazi events across the U.S. and connected with international extremists.

The group dissolved in 2018. For a time, Heimbach said he was out of the White power movement altogether, but now he plans to relaunch the Traditionalist Worker Party  as what he calls a ‘national Bolshevik’ group that takes inspiration from Marxism and China and targets global elites.  This does not mean he has abandoned all of his beliefs from his neo-Nazi days."Do I particularly like Judaism as a religion? No," he said.

The increased violence from racially and ethnically motivated violent extremists over the past few years has governments around the globe concerned. Last week, top U.S. State Department officials and their counterparts in the United Kingdom, Germany and Norway launched a new global effort to thwart the extremism. "The United Nations Security Council counter-terrorism committee recently reported a 320 percent  increase in extreme right-wing terrorism globally in the five years prior to 2020," said John Godfrey, the U.S. State Department's acting coordinator for counterterrorism."

Large scale attacks have occurred in Norway, in New Zealand, in Germany and in the U.S., to name a few. With many of these attacks, the perpetrators have drawn inspiration from each other," said Despo Michael, Head of the UK's Counter-Terrorism Department.

Heimbach named former presidents among those who someone should hold accountable.

Newsy: When the system doesn't arrest or put these people on trial?

Heimbach: Names and addresses. And  I will not be - I mean, I'm not a soldier. I will not be ordering anyone to do anything. But I will not condemn revolutionaries that, you know, stand in their own self-defense.

Newsy:  Matt, where do you draw the line? Is it okay to to kill the president?

Heimbach: I'm going to plead the fifth on that one.

Newsy:  But by pleading the fifth - is when you want to not incriminate yourself, you don't just...?

Heimbach: Well, I'm not a liar.

Because Heimbach is a longtime influencer amongst extremists, extremist expert Beirich says his rhetoric is extremely dangerous.    "We've had so many lone wolf attacks coming from people who will presumably be in Heimbach's audience that this is just a tinderbox, right, that he's ignited," she said. "Law enforcement probably needs to know about what Matt Heimbach is up to. This isn't something now where if you ignore it, it's going to go away."

Sean Powers contributed to reporting for this story.

This story is part of a series looking into how extremism is impacting our nation. If you have an opinion or a related idea you believe we should be covering, we encourage you to reach out.  Mark Greenblatt is the senior national investigative correspondent for Newsy and the Scripps Washington Bureau. Follow him @greenblattmark, email a story tip to mark.greenblatt@scripps.com or send a secure message to markpgreenblatt@protonmail.com. Lauren Knapp is senior video editor for Scripps Washington Bureau and can be reached at Lauren.Knapp@scripps.com or followed at @LCKnapp.