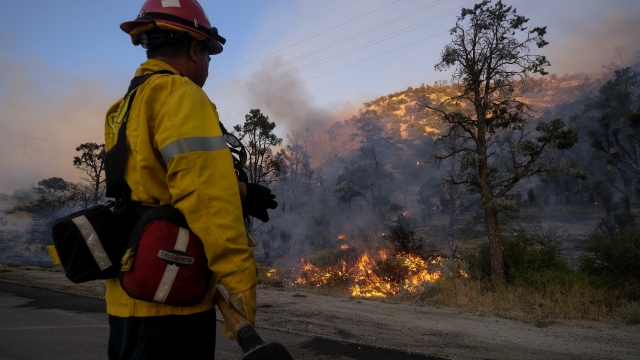 SMS
Extreme Heat, Dry Conditions Supercharging Fires In Western U.S.
By Clayton Sandell
By Clayton Sandell
June 13, 2022
Officials are urging people to take it easy outside, drink plenty of water and check in on neighbors who might need help.

In Southern California, a towering inferno. Flames from the Sheep Fire are burning in the mountains northeast of Los Angeles, chewing through a thousand acres and forcing hundreds of people in its path to evacuate.

High winds, hot temperatures and bone-dry conditions are supercharging fires across the west.

In Arizona, a blaze near Flagstaff is raging out of control. One man has been arrested for starting the fire and residents in several communities have been told to get out or to get ready.

"I'm ready to go if I have to go but I'm not in this situation yet so I'm going to go back to my house and see what else I can find and pray. Pray, pray, pray," Arizona resident Marilyn Atcitty said.

Smoke from the Arizona fire is drifting far to the north, turning the blue skies around Denver and the Colorado Rockies grayish brown.

The high temperatures aren't helping fight the fire. Much of the U.S. is baking in an early-season heat wave. Chicago might hit 100 degrees Tuesday for the first time in a decade and another 100 cities could see record breaking heat.

Officials are urging people to take it easy outside, drink plenty of water and check in on neighbors who might need help.

"Once it gets too hot, you never know how you're body is going to react," Pima County Sheriff's Department Search and Rescue Supervisor Steve Ferree said.

The number of acres burned this year is more than double the 10-year average, and we're not even officially in summer yet. These are exactly the kinds of conditions scientists warn will get worse as humans continue warming the planet.

In the short term, forecasters say there should be some relief from the heat by the end of the week and even some snowfall coming for Montana.