Extent Of Civilian Casualties In Ukraine Brought To Light 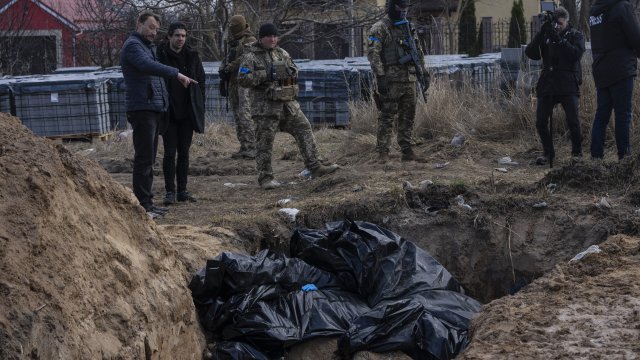 In towns like Bucha, cut off from the world for nearly six weeks, the shocking images of civilian deaths are now out in the open.

In the small suburb of Kyiv, Russian troops terrorized residents. Photographs and video document the scope of Russia’s campaign of killing: a manicured hand and a bright sandal are pieces of Ukrainian life in the mud.

Bodies are wrapped in plastic bags in ditches, people in plain clothes lay on the streets, with their hands and feet bound. From above, satellite images show mass graves.

"We get the impression that the Russian occupiers have got the green light from Putin and Shoigu, the Russian Defense Minister, to have a safari in Ukraine," said Anatoliy Fedoruk, Mayor of Bucha. "They weren't able to take Kyiv, so they vented their frustration on Bucha and the surrounding areas."

Ukrainian officials say Bucha has hundreds of victims — the elderly, women and children among the civilians killed because of Vladimir Putin’s territorial ambitions.

“You may remember I got criticized for calling Putin a war criminal," President Joe Biden said. "Well the truth of the matter is you saw what happened in Bucha. This warrants him — he is a war criminal.”

Pres. Biden says he’s seeking more sanctions that will soon be announced. The U.S. has been gathering evidence of war crimes, and the International Criminal Court launched an investigation last month.

"I saw women killed," said Oleksiy Goncharenko, Ukrainian Parliamentarian. "I saw a body burnt in the vehicle, boy or girl, child, I don't know, maybe 6, 7 years old. It's so awful. It's hard to explain."

"There's one woman from Bucha who spoke with Human Rights Watch, told us about a day in early March where she was gathered with other civilians by the Russian soldiers, and five Ukrainian men in plainclothes were brought into the same roadside," said Aisling Reidy, senior legal adviser at Human Rights Watch. "They were made to kneel down with their hands behind their back, and then the soldiers lifted the T-shirt of one of the men and shot him in the head. They did not proceed to kill the other four who were kneeling, but the women, when they came back to the same area the next day, they saw the body of the man who'd been executed still lying there."

Ukrainian President Volodymyr Zelenskyy, visiting Bucha Monday, said the crimes will be recognized by the world as genocide. Current and former U.S. ambassadors to the UN are calling for Russia to be suspended from the UN Human Rights Council.

Meanwhile on the streets of Bucha, Ukrainians were using cables to move the dead out of fear the Russia forces had hidden explosives under bodies.

With Russian troops retreating in the North and repositioning in the East, there are fears the world will see more devastating scenes of human suffering.