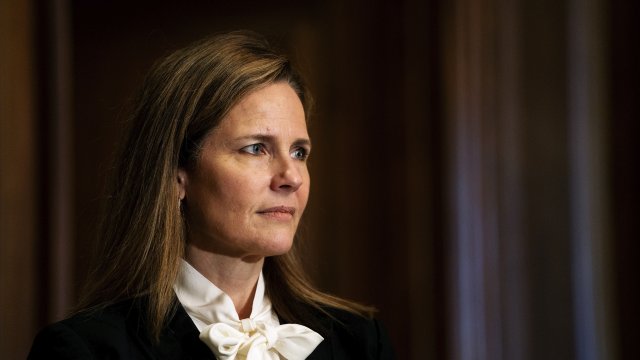 SMS
How Would A Justice Barrett Influence The Court On Immigration?
By Ben Schamisso
By Ben Schamisso
October 12, 2020
Analysts say she would likely uphold Trump administration policies in the near future but otherwise wouldn't be a safe conservative vote.
SHOW TRANSCRIPT

If confirmed to the Supreme Court, Judge Amy Coney Barrett would likely uphold many Trump administration immigration policies that are currently being challenged in federal court, analysts say.

"It's quite reasonable to believe that Justice Barrett, if she becomes Justice, is likely to favor most actions taken by the president," said Muzaffar Chishti, the director of the Migration Policy Institute Office at New York University School of Law.

Those include the rollback of the DACA program, the Remain in Mexico policy, the public charge rule and dozens of other actions meant to curb legal and illegal immigration.

"There's so many things that may come before her to rule on in the area of immigration," said Evangeline Abriel, a clinical professor of law at Santa Clara University School of Law.

But experts also note that Barrett wouldn't be a guaranteed conservative vote. They say her textualist approach makes her unpredictable.

"If conservatives expect Amy Coney Barrett to ascend to the Supreme Court and engage in judicial activism, they're going to be sorely disappointed," said Andrew Arthur, a former immigration judge who's now a resident fellow at the conservative Center for Immigration Studies.

Besides, her tendency to defer to the executive branch on immigration matters could also favor Democratic presidents.

"If she follows the broad authority of the president on immigration, then [Joe] Biden's actions on immigration would have to be given equal deference," said Chishti.

During her nearly three years on the 7th Circuit Court of Appeals, Barrett had a balanced record on immigration cases.

Barrett's legal philosophy is vastly different from that of the late Justice Ruth Bader Ginsburg. And analysts expect Barrett to move the highest court to the right on most issues, including immigration.