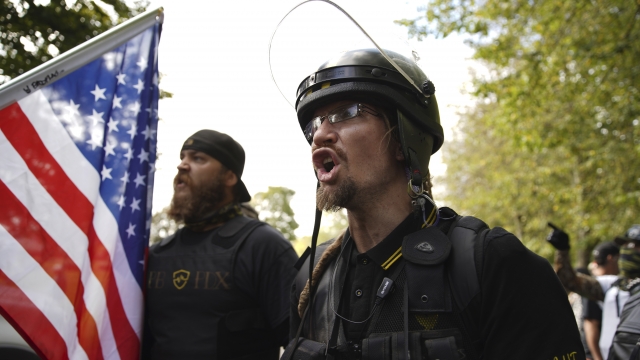 In a major escalation in the war on extremism, Canada declared the Proud Boys a terror group this month. The terror designation means members can face prosecution and have assets frozen.

Yet, the United States is falling behind its Western allies in the fight.  Of the 71 groups on the State Department's Foreign Terrorist Organization list, not a single one has White supremacist leanings.

"I think it's a problem," said Jason Blazakis, who served from 2008-2018 as director of the U.S. State Department's counterterrorism finance office that designates organizations and individuals as terrorists.

The department identifies foreign groups that support terror. It does not keep a list of designated domestic groups that are terrorists, in part, to prevent the wrongful government targeting of political protesters in the U.S.   However, Blazakis says violent White supremacist hate groups are increasingly becoming global in operation, opening up new avenues for the government to stop them.In 2019, Blazakis co-authored a report for The Soufan Center which suggested the U.S. should begin sanctioning certain transnational White supremacy groups. "We recommended a number of organizations that the State Department could consider and Treasury Department could consider for possible sanctions, and to this day, not one of these groups is on the State Department [foreign terrorist organization] list."

In America far-right extremist groups account for more than three times as many killings inside the U.S. compared to Islamist radicals in recent years.   The Anti-Defamation League reports 75% of the 429 killings in the United States from 2011-2020 related to domestic extremists were perpetrated by right-wing killers, as opposed to 20% for those linked to domestic Islamist extremism. Blazakis says U.S. extremists are increasingly looking to get help from abroad, including by traveling overseas to obtain training. "White supremacist camp. They even have a battlefield too. It goes beyond simply having a camp," said Blazakis, who pointed to how U.S. neo-Nazis from an organization called the Atomwaffen Division traveled to the Ukraine to learn from White supremacists there."They come back and they've developed skills on the battlefield or at training camps (and) those skills could be projected against American citizens like me or you," he said.

The far-right Russian Imperial Movement has operated paramilitary style training camps for extremists from around the world. American officials say Swedish men attended one of the Russian trainings and later launched a series of terrorist attacks, including the bombing of a cafe.

"This group has innocent blood on its hands," said Nathan A. Sales, a top counterterrorism envoy for the State Department in April 2020, when he announced the U.S. government was labeling the Russian group and three of its leaders as Specially Designated Global Terrorists.The department stopped short of formally naming the Russian Imperial Movement a foreign terrorist organization — a separate designation which would allow U.S. prosecutors more leeway in charging American extremists who provide material support to the group.

"It's very easy to also sanction that group as a foreign terrorist organization and it will send a very important message," said Blazakis.   The new Biden administration has said its officials are reviewing U.S policies on extremist activity."We, of course, have a review underway — a domestic violence extremist — extremism, I should say, review that’s underway by our national security team to take a look at violence and this type of concerning group activity across the country,"  confirmed White House press secretary Jen Psaki, at a February 3 press briefing. "There are a lot of tools that they can leverage that includes cooperation with counterparts and using the tools they already possess," said Blazakis.

Riin Aljas, a Scripps Howard Foundation data reporting fellow, contributed to the reporting for this story.

As journalists, we strive to cover stories that keep our communities safe. That is why you will see more stories from us related to how extremism is impacting our nation. If you have an opinion or a related story idea you believe we should be covering, we encourage you to reach out.  Mark Greenblatt is the senior national investigative correspondent for Newsy and the Scripps Washington Bureau. Follow him @greenblattmark, email a story tip to mark.greenblatt@scripps.com or send a secure message to markpgreenblatt@protonmail.com. Lauren Knapp is senior video editor for Scripps Washington Bureau and can be reached at Lauren.Knapp@scripps.com or followed at @LCKnapp.