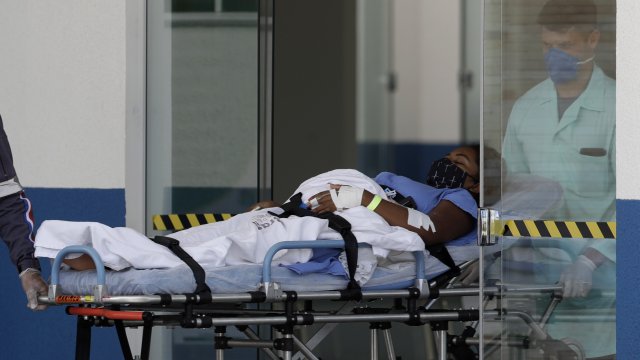 Experts fear that Brazil's lax attitude and variant spread might endanger other nations.

As much of the world sees COVID-19 cases falling or leveling off, Brazil's outbreak is only getting worse.

Hospitals are reaching maximum capacity, deaths are at a record high and a more contagious variant is likely reinfecting people who already caught the virus.

"The level of desperation in Brazil is growing to unseen levels," said Gustavo Ribeiro, editor in chief of the Brazilian Report.

Meanwhile, Brazil's right-wing president Jair Bolsonaro continues to downplay the severity of the virus and the efficiency of masks — while attacking governors who impose restrictions.

"I think he's celebrating the spread of the virus. The more confusion there is, the better for him," said Heloisa Pait, a professor of sociology at São Paulo State University.

A quick vaccination drive would be one way to tame the outbreak.

But Bolsonaro has failed to secure enough doses, even suggesting that the Pfizer vaccine could turn people into crocodiles — and refusing to get vaccinated himself.

"This country has the ability of vaccinating over one million people per day. It has done so in previous vaccination efforts. So now we are vaccinating around 160,000 a day, which is almost ten times less than our capacity," said Ribeiro.

Millions of street vendors have no choice but to continue exposing themselves to COVID because a federal program helping vulnerable populations recently expired.

And taking cues from their president, many Brazilians have been ignoring social distancing rules.

"They partied for New Years as if nothing was happening in the world. That same happens with Carnival. Even though most Brazilian cities banned public celebrations, there were still a lot of illegal parties going on," said Ribeiro.

Now, scientists are sounding the alarm about Brazil's pandemic mismanagement becoming a global threat — as the more contagious variant is starting to show up in other countries, including in the U.S.

"Frankly, I think we need international pressure. I think the world should look at us and say, 'Listen, there's something really wrong going there. How can we help you?'" said Pait.