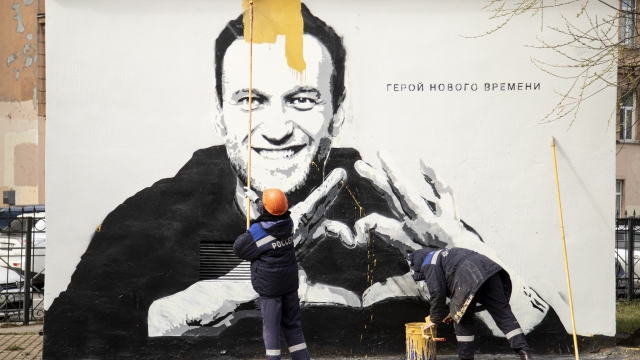 SMS
Putin's Foe Likely Suffering From Long-Term Effects Of Nerve Agent
By Sasha Ingber
By Sasha Ingber
May 4, 2021
The long-term impact of Novichok isn't clear but some of Alexei Navalny's ailments appear to coincide with researchers' understanding of nerve agents.
SHOW TRANSCRIPT

Vladimir Putin’s most prominent critic is slowly starting to eat again, after a 24-day hunger strike in prison. Experts say the Kremlin not only holds the keys to Alexei Navalny’s freedom… but to knowledge of health problems he still faces from being poisoned.

"We don't have a lot of experience with this in people," says Lewis Nelson, the Chair of the Department of Emergency Medicine at Rutgers New Jersey Medical School.

Some doctors say the dissident is likely experiencing long-term effects from exposure to Novichok nerve agent last year. And at a prison east of Moscow months later, the 44-year-old said he was denied adequate health care. So began a dangerous hunger strike.

Novichok hinders an enzyme that regulates the nervous system’s ability to send signals. But most researchers know little about Novichok, a Russian word meaning "newcomer" for when this class of nerve agents was invented. With poisonings so rare, understanding largely comes from different but related substances, including accidental overdoses of pesticides and a sarin attack on a Tokyo subway in the ‘90s.

"It's Russian intellectual property. They have all the secret files on this," says Dan Kaszeta, a chemical and biological weapons expert. "In the ‘70s and 1980s when these things were being developed in the Soviet Union, the safety record of this program was particularly appalling. There is no doubt in my mind that it had numerous accidental poisonings and exposures to these chemicals."

Our partners at the investigative group Bellingcat discovered a “poison squad” that appears to work with a scientist from that early program. This secret group, part of a successor to the Soviet Union’s KGB, is blamed for the attack on Navalny — though the Kremlin denies Russia’s hand.

"Something with an obvious trail that leads obviously back to Moscow and St. Petersburg, it makes me wonder, is lethality necessarily the end state? Perhaps long-term disability is as bad a punishment for somebody as the perceived enemy of the state as just killing them outright," Kaszeta says.

Russian doctors initially treated Navalny, saying they found no trace of nerve agent. Eventually, he was flown to Germany for more care. But in January, he returned and was arrested in Moscow. He’s serving a 2.5-year prison sentence, his recent appeal rejected.

"Navalny wanted to be with his people. This is what he always said to me," says Vladimir Milov, and adviser to Navalny. "I'm pretty sure that he fully realized what's going to happen."