Former Prosecutors: Trump Could Have Been Charged With Obstruction 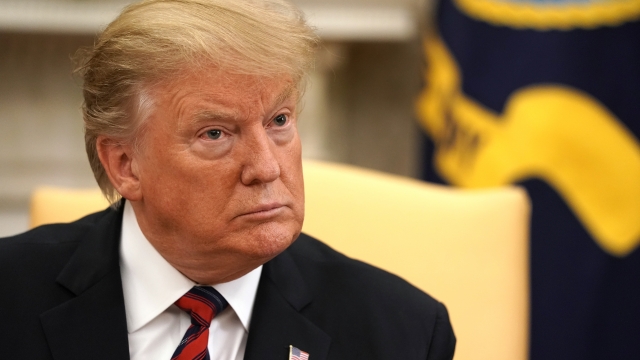 Hundreds of former federal prosecutors are taking a stand against President Donald Trump. They say based on special counsel Robert Mueller's findings, President Trump would have been charged with obstruction of justice — if not for a longstanding DOJ policy against indicting a sitting president.

More than 400 former Justice Department officials have signed this letter, published on Medium, that says they believe there's more than enough evidence to charge the president "in multiple felony charges for obstruction of justice."

The list of signees is being monitored and updated by the nonprofit group Protect Democracy, which has challenged the president in the past. The former prosecutors on this list have served under both Republican and Democratic administrations, including the Trump administration.

Among those instances are when he allegedly ordered then-White House counsel Don McGahn to fire Mueller, and then attempted to have McGahn deny he was ordered to do so. Others were connected to Michael Cohen, the president's former personal attorney; to Paul Manafort, his former campaign chairman; and to various efforts to try to control what was said during the Mueller investigation. Manafort and Cohen are now serving prison sentences for financial fraud.

Attorney General William Barr said he and Deputy Attorney General Rod Rosenstein, who submitted his resignation letter a week ago, did not find Mueller's evidence sufficient to prosecute President Trump. During his testimony in front of the Senate Judiciary Committee, Barr said President Trump had the "constitutional authority" to do many of the things Mueller said may have been obstruction.

Since the release of Mueller's report — the redacted version, that is — several Democrats have said the House needs to start impeachment proceedings. House Speaker Nancy Pelosi has said she does not support the idea of impeaching President Trump because it is "so divisive to the country," but also hasn't ruled it out just yet. Pelosi has also criticized Barr for how he handled Mueller's report and has accused him of misleading the public. In April, she told The Associated Press: "I don't trust Barr, I trust Mueller."

The House Judiciary Committee has called on Mueller to testify by May 23.